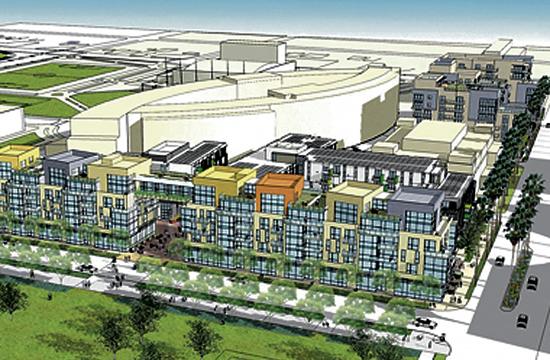 The developer of the proposed Civic Center Village housing project in the shadows of Santa Monica City Hall and the RAND Corporation pleaded with council members on Tuesday that a 99-year lease was not enough. Apparently, what was enough was a 149-year lease. A bare majority of council members agreed with the developer, as the Civic Center Village project received the green light to move forward in a four to three vote.

Related California’s president William Witte sought the council to extend its ground lease to the development company for a pair of properties on Ocean Avenue to 149, or 50 additional years, as both he and Housing and Economic Development Director Andy Agle argued the extension would help secure financing for the project.

Witte specifically told council members that current market conditions made it quite difficult to finance condominium projects Civic Center Village is a 324-unit condominium project – and that his company would only be able to receive financing from Wells Fargo Bank if the ground lease for the project was extended to 149 years.

Yet, the controversial issue that caused a split among council members was the valuation of the lease extension.

By determining the actually significant value now, Shriver said, council members could ensure the city receives fair value for the lease extension when the option is exercised well after everyone on the dais had passed away.

Conversely, not determining the exact value of the option could result in the city being short-changed of quite a hefty chunk of change in the 21st century, Shriver continued.

Accordingly, Shriver wanted his colleagues to hold off on making a final decision on the Civic Center Village project – which has already been delayed since 2008 – until staff could determine what that “significant value” would be.

City Manager Rod Gould rebutted that determining the actual value of the lease extension would essentially be an exercise in futility, not to mention a complicated process. Shriver volleyed back by saying option valuation was actually rather “simple.”

During the discussion on the dais, Council member Bob Holbrook appeared to be in agreement with Shriver, stating he, too, felt a little uncomfortable moving forward with the project without knowing all the elements in the equation.

Conversely, on the other side of the argument, Mayor Richard Bloom, Mayor Pro Tem Gleam Davis, and Council member Kevin McKeown believed holding off two weeks for a vote in order to determine a value that may not have any impact on the project would seriously jeopardize what they hold to be an otherwise vital development for Santa Monica.

Davis specifically stated the project would be “killed” if council had waited two weeks to determine a number that no one, she believed, would know what to do with.

“The whole reason we’re here tonight is for Related to get financing,” Davis argued. “If we impose additional costs on the project, we’re going to kill the project.”

Davis added that the fact that about half of the project would be dedicated to affordable housing was reason enough to punt on Shriver’s request.

Complementing Davis’ statements was Witte, who added there was a sense of urgency with this development because Related has about $10 million in state bond money allocated to it for financing of the affordable housing aspect of the project. Those funds must actually be used almost immediately.

Waiting for an appraisal of an option value would seriously jeopardize those funds, Witte stated.

In the midst of splitting hairs about financing and value appraisals, Gould, Witte, and staff members took a break from the discussion and held court adjacent to Council Chambers to discuss the issue in private as the full dais continued on with the rest of the agenda.

Upon return, one compromise was reached between the city and Related: the development company agreed the project should be inclusive of a Hire Local initiative, requiring the retailers that would fill up to 20,000 square feet of space throughout the project to consider employing qualified Santa Monica residents first.