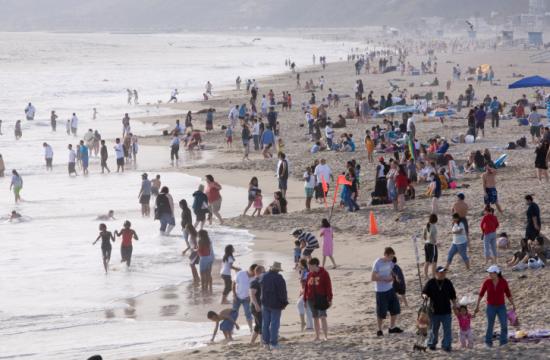 A few canines were certainly wagging their respective tails in happiness on Tuesday evening, as the Santa Monica City Council urged staff to establish a dog park at local beaches.

At the request of Mayor Pro Tem Gleam Davis and Council member Terry O’Day, Santa Monica’s city staff will look into working with Sacramento in setting up a pilot program for an “off-leash area for dogs on the beach and down to the waterline.”

As part of the pilot program, which would be set up on Santa Monica State Beach, free-roaming canines would be monitored both on the sand and in the water to determine any potential hazards, be it social, health, or environmental.

“We have many dog owners who I think would appreciate the opportunity to take their dogs to an off-leash dog area near the beach,” Davis said.

The pilot program would evaluate the social and environmental impacts of unleashed dogs on the beach.

One potential barrier: Sacramento. Under a state code provision, unleashed dogs are prohibited on state beaches. Santa Monica State Beach, while operated by the City of Santa Monica, is owned by Sacramento via California State Parks Commission.

“The state policy on this is pretty tough,” said Council member Bobby Shriver, who had previously served as chair of the State Parks Commission. “The state’s policy on this is very, very negative. (A pilot program) just will not work unless the governor changes the policy. These are state beaches and the city has no jurisdiction on them whatsover.”

However, City Manager Rod Gould responded a study was conducted with “definitive” results from about 60-some dog parks, indicating the health and safety impacts were minimal to nonexistent. That study would be presented to relevant state officials along with the pilot program’s parameters.

Still, Shriver was adamantly particular during the council member discussion that he did not want staff to invest too much time into exploring the pilot program and wanted to make certain the action taken at Tuesday’s meeting would not indicate to anyone to mean that the city would be taking a hard stance against the state in favor on this issue.

The city would potentially partner up with Unleash the Beach, a group dedicated to providing as much free beach space as possible for dogs to roam.

California State Parks has apparently not been cooperative with City Hall in allowing unleashed dogs at Santa Monica State Beach. Among the chief concerns are potential lawsuits stemming from dog bites.

Also raising concern is whether water bacteria levels would increase because of dogs running loose into the water. One speaker at Tuesday’s council meeting pointed out there is a direct connection between dog feces and increased bacteria in the water.

Previously, Dockweiler State Beach in Playa Del Rey had considered an off-leash dog park on the sand; however, it never materialized.

If the pilot program proves that negative social and environmental impacts are minimal, the dog park could potentially become permanent.

The council direction to staff was approved by a 6 to 1 vote; Council member Pam O’Connor voted no.