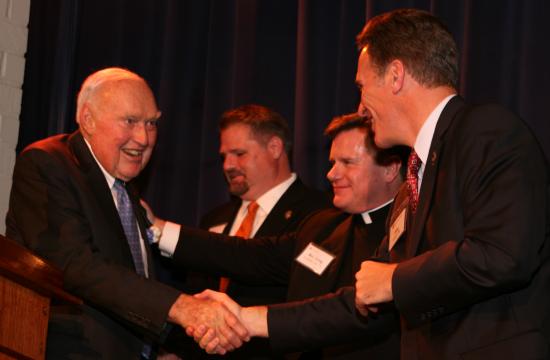 The Cahalan Award is presented annually to Loyola alumni to honor the enduring contributions of former President Patrick J. Cahalan, S.J. during his 27 years of service at the high school.

It is in recognition of his belief in the ideals of Loyola and the Ignatian spirit of the Magis as exemplified through distinguished and meritorious service to Loyola and its community, the city of Los Angeles, the state of California and the United States.

“There aren’t many people who can say they played baseball with Joe DiMaggio, were a Navy pilot and had a successful and compassionate law career,” said Loyola President, Rev. Gregory Goethals, S.J. “But Henry Workman isn’t just anyone. He is an exceptional person that puts his fellow man first. Henry defines what it is to be a man for others.”

Henry Workman’s outstanding performance on the varsity baseball team at Loyola led him to eventually play for the Yankees with Joe DiMaggio.

A Navy pilot first, Mr. Workman left baseball to pursue a law degree. He has dedicated his legal career to protecting the rights of individuals.

A St. Monica parishioner, Mr. Workman is a strong leader within the Loyola alumni community and a member of the Shepherd Park Committee.

This committee is dedicated to raising funds for an athletic park honoring Fr. Bob Shepherd, S.J.