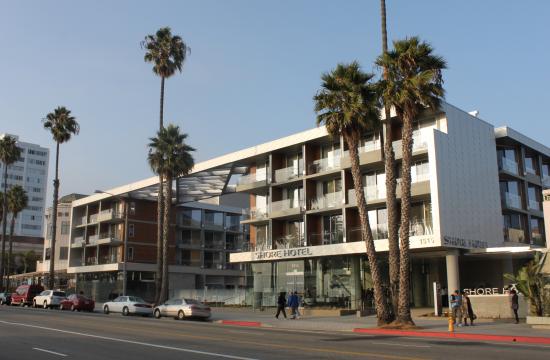 The family behind Santa Monica’s brand new Shore Hotel says they have raised the environment bar when it comes to creating a virtual clean footprint with respect to reducing carbon emissions.

It celebrated its completion with elected officials and the business community at a ribbon cutting ceremony on Oct. 20– about nine years on from the project’s inception.

The Farzam family is behind the eco-friendly property located at 1515 Ocean Avenue. The family has other hotels that it independently owns and operates in Santa Monica including the Ocean View Hotel nearby at Ocean and Broadway.

Steve Farzam, Shore Hotel Chief Operating Officer, said the new 164-room complex was “the first hotel in the entire United States of America, and possibly even the world” to implement dynamic technology referred to as demand response, also known as Auto DR.

“This auto demand response system is a new technology developed and instituted by the Southern California Edison (SCE),” Farzam said. “Rather than them asking us to reduce our demands, for instance reducing our air-conditioning or doing our laundry at night, we have voluntarily signed up with Southern California Edison and partnered with them as the first hotel that’s LEED certified to have a 100 percent automated system that we have absolutely zero control over, that allows them to tap into our systems, and selectively without interfering with the guest experience and the guest operations, to reduce our electrical consumption five-fold.”

For example, SCE can tap into the hotel’s electricity system and reduce the lights from 100 percent output to 50 percent, and reduce air-conditioning from a certain demand to lower demand.

The hotel’s elevators are also the newest and best available, Farzam said. The Otis Gen 2 elevators have the ability to recreate their own electricity by the weight on the other car that’s next to it on a pulley system.

Solar panels on its roof, similar to those that power the Ferris wheel on the Santa Monica Pier, generate the required electricity to power the hotel’s pool and hot tub 100 percent.

“We essentially have established a new benchmark for all the new hotel constructions throughout the U.S.,” he said. “Shore Hotel has done this, you have to meet or exceed what they have done.”

Shore Hotel is currently Silver-LEED certified, and one point away from being Gold-LEED (Leadership in Energy and Environmental Design) certified, which Farzam said was “absolutely remarkable for a new construction, particularly in the hotel industry.”

“We are a pillar in the community and our relationship with businesses alike and our neighbors is strong,” he said. “Without their support, their acceptance and their approval, we wouldn’t be able to succeed.”

The property was previously occupied by two parcels of land that were home to the Pacific Sands Motel and a Travelodge motel, which were both smaller facilities of about 30 rooms each.

Gensler Architecture conceived Shore Hotel’s modern design for the space, which features stylishly appointed rooms dressed in shades of teal and orange and outfitted with custom?made teak tea wood furniture, each with its own private balcony facing the ocean.