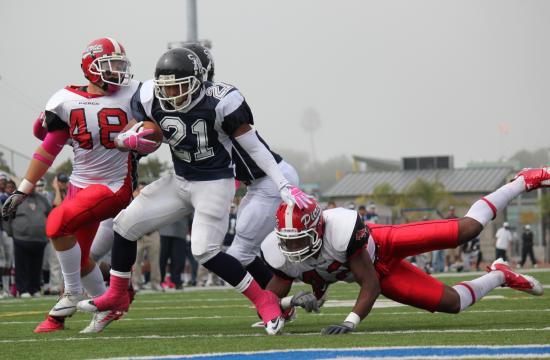 The Santa Monica College (SMC) Corsairs squeaked past L.A. Pierce 37-31 on Saturday despite being outgained 455-371 in total offense.

With all the yards the Brahmas gained, they couldn’t convert a fourth-and-10 in Corsair territory on their final drive, as a pass by quarterback Jake Basmagian fell incomplete to seal the Corsair victory.

The big difference in the game was special teams.

SMC Receiver Frank “Tank” Murray, who caught one touchdown, doubled as the punter for the Corsairs and believed that special teams changed the course of the game.

Murray recovered two special teams fumbles when his punts bounced off unaware Pierce players. These two fumbles led to points on the board for the Corsairs, who at one point in the second quarter were up 28-7, before the Brahmas scored a touchdown right before the half to make it 28-14.

In the third quarter the Brahmas scored 10 unanswered points before SMC kicker Trevor Dionne tacked on a field goal to make the game 31-24 and later kicking two more through the uprights in the fourth quarter.

“There are three aspects to the game,” said Lindheim. “The offense, the defense, and the special teams, and I thought that we were better than them on special teams today.”

Early in the fourth quarter, the Brahmas tied the game at 31-31 after L.A. Pierce quarterback Basmagian completed a 29-yard touchdown pass to Tali Satterfield-Row.

“Honestly it was it little too close for comfort,” said SMC quarterback Alfonso Medina. “And going back-and-forth was nerve racking.”

Pierce rolled into the fourth quarter confidently and the mood shifted when SMC cornerback Martin Perry picked off Basmagian at the Pierce 30 and ran it back to the Pierce 19. This led to a 32-yard Dionne field goal that gave SMC some momentum early the fourth quarter, even though holding penalties plagued the rhythm of the SMC offence many points in the game.

“I thought we were our own worst enemy,” said SMC Head Coach Gifford Lindheim. “I wasn’t happy with the penalties.”

“That’s another major fallback we have as a team,” said wide receiver Kris Comas, who scored two touchdowns on three catches for 63 yards in the Corsair victory over L.A. Pierce. “It’s (the penalties were) on both sides but we’re going to get better at it.”

Medina threw for 226 yards and three touchdowns to counter his two interceptions.

“My receivers caught everything I threw at them,” Medina said. “My line blocked great but there is always ways to get better. We need to get better.”

And although Myles Johnson ran for 122 yards, the Corsairs moved the ball better through the air.

“This is the most wins SMC has had in quite a few years but we aren’t satisfied with five wins,” said Lindheim. “We have three games left and we are going to take each one, one at a time and try and win all three.”

“I guess (in order to beat defending champ) LA valley we got to keep working hard and practice even harder,” Comas said. “We are 3-0 in conference and that’s what we like to be at and we realize the potential we have as a team.”