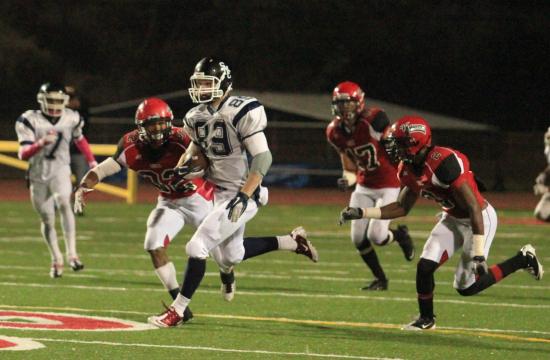 With a safety and a fifty-two yard rushing touchdown, Santa Barbara (0-6) not only had the momentum going for them near the end of the first half but also a commanding lead at 9-0.

But a forced fumble after a punt led to a 30-second drive by SMC (3-2) concluding with quarterback Alfonso Medina connecting with Myles Johnson for a 12-yard touchdown right before the half.

SMC kept the momentum going with a standout performance by their defense and special teams that created four fumbles and had two interceptions in the second half.

And the offense took full advantage with five touchdowns to put the game away at 33-9.

Medina, who was 20-of-29 for 339 yards for the night, found Kris Comas open during much of the second half and connected with him five times for 105 yards and two receiving touchdowns. A final 78-yard touchdown pass to freshman tight end Aaron Boesch was the dagger.

“Kris Comas had two big touchdowns and Daniel Pipkin did some really nice things,” said Lindheim. “(Pipkin) recovered two fumbles and he ran the ball, but he was also on every special team. Alfonso (Medina) continues to improve and (during) the second half, I thought he threw the ball extremely well.”

SMC will play at LA Southwest next Saturday at 6 p.m.