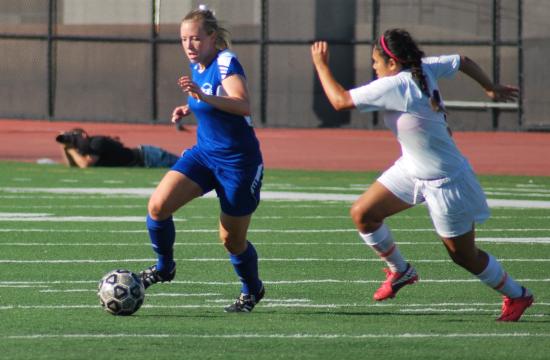 The mantras “defense wins games” and “the best offense is a good defense” were clearly thrown out the window as the superb defense of Santa Monica College’s Lady Corsairs soccer team (3-5-3 overall, 2-0-1 conference) failed to produce any goals against Los Angeles Pierce College (8-1-2, 4-0-1).

But the good news for the Lady Corsairs was the Lady Brahmas didn’t score either, and the two teams played to a 0-0 tie.

SMC Head Coach Aaron Benditson attributed the Lady Corsairs’ defense, which limited a potent Pierce team to a scoreless match for just the second time this season, to “strength in numbers.”

“Being organized defensively, that was the name of the game today; defend with ten,” Benditson dsof. “Our identity this year is strength in numbers. I don’t think it’s going to be one or two players. It’s going to be our collective effort: our intensity, our focus and holding each other accountable.”

And “zero” turned out to be a good thing in another category for SMC, as the Lady Corsairs have zero losses in its last six matches, notching a 3-0-3 record after an 0-5 start.

Benditson said the Lady Corsairs may have lost a game like this earlier in the season. However, SMC’s team mentality and collective maturity 11 games into the season has allowed them to hang with a team such as Pierce.

“This is a massive win for us. In the beginning of the season, we probably would have dropped these type of (matches),” Benditson said.

Last season, Pierce was ranked third in the nation and lost in the Southern State Final game to No. 4 Cerritos.

The six-match surge has come at the right time, as it coincided with the onset of conference play; with the scoreless draw with Pierce, SMC is currently in second place in the Western State Conference’s Southern Division.

The Corsairs continue conference play at Citrus on Friday.