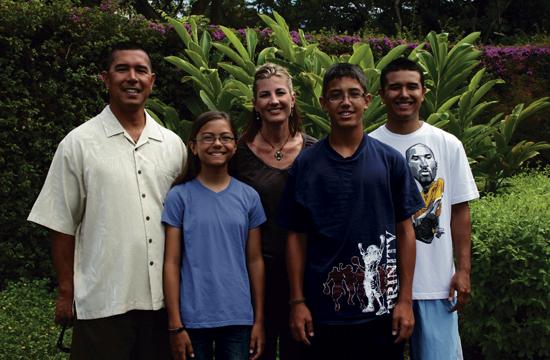 More than 5000 people are expected to take part in the American Heart Association’s Los Angeles County Heart Walk today, Oct. 15 – many of whom have been affected by heart disease and stroke.

One of them is Santa Monica Police Sgt. Dean Oshiro who nearly died from a heart attack in August last year.

He said he looked forward to the 5K (3.1 mile) walk/run with his family as the event raises awareness and funds toward the mission of building healthier lives, free of heart disease, stroke, and other cardiovascular diseases.

Oshiro recalled how unexpected the heart attack was when he was at home with his three children while his wife was at work.

He said it was a typical Friday that started with meeting a couple of friends in the morning. When he returned home, he went for a three-mile run followed by a session of lifting weights in his garage.

Oshiro managed to call 911 and briefed them on what was going on. Shortly after the call, he passed out.

“Later, I found out from the paramedics, I probably was in full cardiac arrest, no pulse, not breathing,” he said. “My daughter went upstairs and woke up her two brothers, 21 and 13 years old. The children went downstairs and found me on the living room floor, lifeless, with the phone in my hand. The 911 dispatcher called back to the house and spoke to my oldest son to get more information.”

Paramedics arrived at his house about five minutes after the 911 call was placed and immediately began CPR.

“My wife called back to see what my emergency was and my son told her the paramedics were in the house giving dad CPR,” he said. “She was panicked, called a girlfriend for help and support and then drove home. She got home just before the ambulance drove me off to the hospital.”

Paramedics had to defibrillate his heart twice while in the house and once on the way to the hospital.

Once he arrived at Providence Holy Cross Hospital, he was met by a team of emergency room doctors and nurses and a cardiology team.

The medical team was able to act quickly and repair the damage by inserting a stint in his left main artery.

The recovery process took about five months for Oshiro, who was 45 years old at the time.

Oshiro said the cause was unknown, but the doctors speculated that he had a “plaque rupture” – when a large piece of plaque breaks free in an artery.

He said his family has a history of high blood pressure, and two of his uncles had suffered from heart attacks.

He said his near death experience has changed the way he now eats.

“I have reduced the amount of red meat, foods high in cholesterol and fat,” he said. “I’ve also changed the portions of food types, by trying to eat a half plate of vegetables, quarter plate of protein, and a quarter plate of grains.”

He said this Saturday’s Los Angeles County Heart Walk will be the first he has participated in after he heard about it through Providence Holy Cross Hospital.

Oshiro has been with the SMPD for the past 18 years. He is a sergeant who supervises the Homeless Liaison Program, Gang and Youth Intervention Unit, and Airport Security Unit.