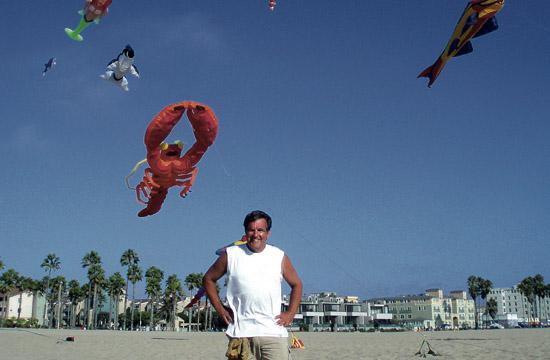 To put it simply, all aerospace engineers work to put things in the sky. Wayne Brooks, however, may very well be the only member in his field who has successfully figured out how to make lobsters, dolphins, killer whales, and yes, even mermaids, fly.

Brooks, 54, a resident of San Fernando, works double time as both an engineer and a kite enthusiast.

The former he does for pay, the latter for fun.

He owns hundreds of kites of all colors and shapes and sizes, which he has flown all over the country.

But fortunately for Santa Monica, his favorite place to set up shop is on the beach.

Brooks flies show kites, which differ from regular kites mainly in their scope and size.

On average they are larger than regular kites, flown higher, and are often meant to be displayed in groups.

Also, judging by the wide-eyed crowds of people taking photos, gaping and pointing one recent Sunday on Santa Monica Beach, Wayne Brooks’ puts on a kite show that might just stop you in your tracks too.

Towering 150 feet above the sand and the palm trees, his kites are not easy to miss—three long strings of large, brightly colored sea creatures tethered in the sky, swimming together in rhythm against the current.

It’s a beautiful, meditative sight, which, Brooks admits, is why he does it. “Lots of smiles on lots of faces,” he says, nodding at the spectators.

Indeed, it seems impossible for anyone within a few hundred yards in any direction to look up at the clown fish, the pod of dolphins, the killer whales, the mermaids, and scuba divers, and not smile.

This particular Sunday was what he calls his “Lobster Show,” evident by the three 23-foot lobsters toward the bottom of each line. “I usually fly my lobsters on Mothers’ Day, so I can say I’m treating all the moms to lobster, only I couldn’t make it this year.”

For all the fun, however, flying a few dozen show kites at once is not all that simple. This is where Brooks’ engineering background comes in handy.

Each string of kites is anchored by a sand bag buried deep in the beach, and strung together with his personally designed system of heavy-duty Spectra rope and carabiners. The whole set-up requires constant attention, which Brooks maintains even while chatting with the curious onlookers.

When the wind changes suddenly, he spins around, pulls on his gloves and runs over to keep the lines from tangling.

While he’s at it, he decides to add a stingray to the center line and an enormous, SUV-sized puffer-fish to the left line. “It’s more than just putting a kite up in the sky,” he says, working quickly and expertly to fill an extra sandbag and clip down the line before the wind picks up again.

Watching him, it’s hard to believe Brooks didn’t even know what a show kite was eight years ago.

During a business trip to Florida he just happened to walk past a kite store. He stopped, ducked inside, bought one, and that was all it took. Another business trip brought him back a few months later and he bought a second. “My love for kiting just grew and grew from there,” he says, laughing—“it grew out of control!”

Now not even Brooks himself knows exactly how many kites he owns. “Probably around 500 or so. I’ve never bothered to count them,” he said.

Those who missed Brooks’ show recently need not despair.

Every other Sunday for the past eight years he’s been setting up on Santa Monica Beach, and he has no plans to stop anytime soon. There shouldn’t be any trouble finding him—just look for the giant dolphins beneath the clouds.