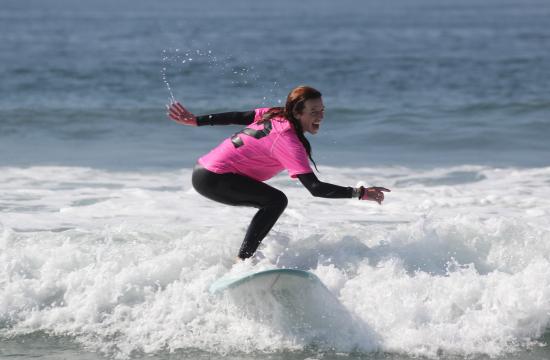 Celebrity actor Tanna Frederick came to California green off the bus from Iowa and not knowing what to expect, but instead of letting Hollywood dictate who she should be and what she should do with her life, she redefined her self, became a surfer, and created Project Save Our Surf (S.O.S).

During the past few years Frederick found herself enmeshed in the world of acting, starring in movies like “Hollywood Dreams,” (2006) “Queen of the Lot,” (2008) and her current project, “M Word,” co-starring Frances Fisher.

Frederick’s passion for acting, surfing, and “adrenaline type sports,” is quickly gaining notoriety and she has attracted a stream of like-minded Hollywood actors, pro-surfers, and celebrities with similar concerns about the ocean and the environment.

“I started surfing five years ago with a girlfriend from Santa Monica,” said Frederick who co-hosted the fourth annual Project SOS: SURF24 celebrity surfathon this past weekend off Lifeguard Tower 28 in Santa Monica. “I’m from a land block state so the ocean is really incredible to me.”

The fundraising event has previously been held in Huntington Beach the past two years.

“I’m looking for something that gives you that kind of spiritual fulfillment and stillness,” said Frederick, who had been looking for an outlet after arriving in California. “Surfing does that for me.”

Frederick, along with legendary surfer Peter “PT” Townend, gathered together a large group of celebrities and united them under a common Project S.O.S. banner, not only successfully building awareness of ocean pollution found in the waters of Santa Monica Bay, but also to raise money for the aid organization.

“The bonus for this kind of charity is that all these guys surf, they love surfing, so they actually and willingly want to help in the cause and believe in the cause,” Spencer said. “It’s not just a turn-out for some photos.”

Spencer contracted pneumonia a few years ago after surfing in the waters up in Malibu, which led to his personal interest in the Project S.O.S. event.

“I had walking pneumonia about three or four years ago,” said Spencer. “I didn’t know what it was, it was like a “House” case. It was weird… I was coughing and had respiratory issues and went home and had lung X-rays. I had a blood test, and I had walking pneumonia, which was probably from the water… After that, I was like, ‘Whoa! That’s not good,’ you know?”

When Spencer learned about the Project S.O.S. event he said he saw it as an opportunity to use his celebrity status to raise awareness of pollution in the ocean where he surfs.

“I started surfing more and more, and started surfing up north where it was a bit cleaner, but I found out about Save Our Surf and what Tanna is doing, so I decided to come out and support it more,” Spencer said.

Frederick seems to understand why actors may have found the same type of spiritual fulfillment that she has found in the water.

“(When it comes to surfing) you have to break into action quickly so it requires the same thing as acting where you have that stillness and then you have action,” Frederick said. “The first time I got up on a wave I realized that it was all that, it was that surge of adrenaline that I felt so I’ve just gotten into it.”

Frederick thrives on being in the limelight, both on and off the stage. Her energetic and upbeat attitude about life and acting creates an attitude that is infectious among other actors from the Hollywood world, and she has started a surf culture in their ranks.

At the event, practically everyone was saddling up next to her, talking to her, sharing her dream and vision for cleaner waters, sharing lifestyle choices that preserve the environment rather then destroying it.

Pro long boarder Jesse Timm received the Sovereign Earth award for his surfing participation and contribution to this year’s Save Our Surf event.

“It was an amazing gathering of pro-active surfers and beachgoers discussing and brainstorming on current and future issues we are currently experiencing or are about to in the future,” said Timm, who also custom shapes surfboards.

“I will absolutely be there next year to help out Tanna, no question. I have been asked by Tanna Frederick to help with the organizing of next year’s Project Save Our Surf event along side Michael Munoz, Peter Brinckerhoff, and Karen Pardue. I’m excited to be a part of its growth and can’t wait to get a head start.”

The Project S.O.S. event even attracted a local Chumash Indian chief who attended the opening ceremony, providing the event with local indigenous support.

“We are here for the health of our waters,” said Mati Waiya, a chief from the Chumash Village and Wishtoyo Foundation in Malibu, who offered a nature blessing on Saturday. “We only get one chance and we have to make the most of it.”

During the induction ceremony, Waiya explained the sacred bond all people have between the ocean and their lives and why there was a strong need to keep the waters clean.

“We have to challenge the system and get out there,” he said.”

Waiya’s heritage is the native Chumash people who have been in the southern coastal California region for more than 13,000 years and have always had a strong bond with the water and its connection to life.

The chief engaged all the surfers in a formal ceremony right before they went out in their heats, holding smoking incense burning inside of an abalone shell before each surfer.

Then, after Waiya had everybody turn the cardinal directions, finally facing towards the ocean, the participants surfed in their respective heats.

Some of the other charities that joined Project S.O.S. included the Santa Monica Baykeeper, Waves For Water, Inside the Outdoors, the Tumelo Home, and children affected by Cystic Fibrosis.

Frederick has fashioned herself as the key that opens the door, challenging everyone in the region to think about what they are doing to the environment, reminding all that no matter who they are or how busy they become that they should never forget the beauty that is around them.

“I’ve also met a really cool group of people,” said Frederick about everyone that she attracted to her surf event. “(These are) people who aren’t very full of themselves and who are humble. I think they’ve been humbled by the ocean and they’re humbled by giving up a certain sense of control because they have to go by what the ocean does and surf when the oceans allow them to.”

Frederick is on a wave and her wave is a thrill ride energizing everyone fortunate enough to follow her lead.

“It’s a chill group of people,” said Frederick about surfers and anybody who takes the time to learn how to surf. “And I like that.”