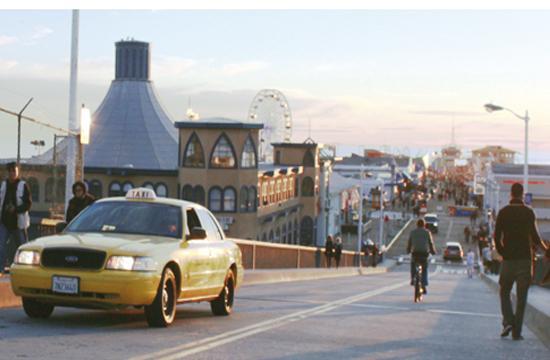 Customers of taxi drivers and hired drivers at local businesses, such as hotels, in Santa Monica may not have known the vehicle they were accessing may have bribed someone for their business.

That will change after the city council’s meeting at Santa Monica City Hall on Sept. 27., as Santa Monica businesses may no longer accept money from hired drivers and allow them preferential access to potential customers in return.

The commonly affected businesses include hotels, night clubs, and restaurants.

A few taxi drivers pleaded with council members at the Sept. 27 meeting to end graft-like conditions at the various establishments they serve in Santa Monica. The taxi drivers alleged doormen, bellhops, or other associate accepted cash from a hired driver in order to gain access to traveling customers ahead of Santa Monica-licensed taxicabs, many of whom apparently awaited those same customers.

“When patrons of a hotel, restaurant, night club, or other business establishment need a taxicab or other vehicle-for-hire, they frequently will request the service through a doorman, bellhop, bartender or other employee of the establishment,” Taxi Franchise Program Coordinator Salvador M. Valles said.

“What the customers do not know is that in some instances the employee of the business is, in effect, selling their trip to the taxicab or other vehicle-for-hire driver in return for monetary compensation. Such practices cause business to go to the companies and drivers that are willing to pay for access to customers, instead of to those that deliver the best service.”

One taxi driver put the situation in simpler terms.

He said many honest taxi drivers, whom are licensed to operate in Santa Monica, are the victims of unfair competition, claiming corruption favoring unlicensed vehicles-for-hire.

“If you don’t pay, you get skipped (for someone who will),” Metro Cab Company driver David Foster told council members. “They (will) call in another company or someone from your company who will pay (money).”

Foster and other taxi drivers outlined a situation where taxicabs are essentially going toe-to-toe with town car-style hired drivers for customers.

At Santa Monica area hotels, for example, taxi drivers customarily line up by the main entrance area to potentially serve guests who seek transportation. When a hotel guest requests a bellhop for taxicab service to the airport, taxi drivers claim the bellhop will pass on them and instead direct the guest to a town car driver. Apparently, the town car drivers are willing to kick back some cash to the bellhops – colloquially referred to as “cookies” – for the privilege to bypass the taxicabs already waiting in front of the hotel.

Foster told council members that, at times, the situation had become rough and taxi drivers had to “run off” the town car drivers, many of whom operate as “de facto taxicabs.” There have been occasions where a taxi driver has waited in a taxi line for as much as an hour for a potential customer, only to be passed up for a town car-style driver who provided a “cookie” to the bellhop or concierge.

“I have every right to be on that property servicing the guests of Santa Monica,” Foster said. “So when the doorman excuses me and gives somebody else a ride because I don’t participate in the crime of giving the bribe, I’m being punished for doing the right thing.

“The people who are doing the wrong thing are being rewarded.”

Taxicabs must be permitted to operate in any given city; the permit allows taxi drivers to wait for customers in taxi lines, be hailed by customers walking on a sidewalk, or be set up by a bellhop or concierge to meet a hotel guest.

De facto taxicabs, or hired town car-style drivers, are not authorized to do any of the above; instead, hired drivers are generally solicited directly from individual customers.

The council hoped by passing the ordinance, regulating the taxicab space in Santa Monica would be a little easier.

“By changing the law in the ways that are recommended here tonight, we’ll be making it illegal on both sides and making this a much easier thing to enforce,” Council member Kevin McKeown said in response to the alleged kickbacks.