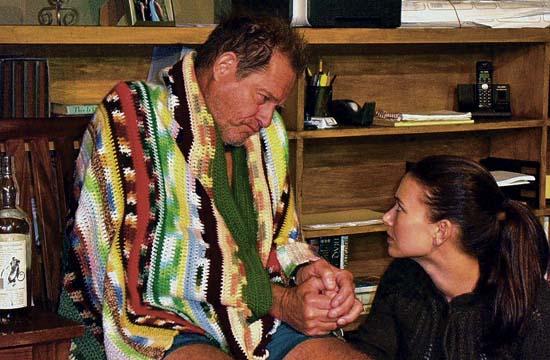 The Los Angeles premiere of Steven Metcalfe’s compelling play, “The Tragedy of the Commons,” on stage at the Ruskin Group Theatre, is a searing drama that delves into loss – both immediately personal and tangentially external. It gives us an insider’s look at the agony of those left behind who try to come to terms with the tragedy of losing a loved one.

In a riveting, emotionally sustained performance, Brian Kerwin lives in the skin of the overwrought character of Dakin Adams, a retired high school teacher who fills his time writing a blog called “Notes From Zone 3,” through which he tries to cope with his crumbling world. Not many actors can pull off long monologues without breaking the fourth wall, but in one particularly compelling monologue, where Dakin reminisces about his life, Kerwin succeeds in delivering a brilliant, mesmerizing, totally focused moment.

Under the taut direction of Dave Florek, who keeps the action moving at the appropriate pace, the playwright skillfully unravels the story with precise surgical hands, from the opening scene that begins with Dakin using a new oral program that supposedly captures your words on the computer as you speak. The subtext is powerful as one gets an immediate sense that the sometimes surface dialogue is a smoke screen for smoldering issues and emotions.

The Adams have been enjoying a wonderful view from their home which has been somewhat obscured by a runaway oleander hedge which Carl is willing to cut back. The big threat, however, lies in the potential sale of Carl’s house carrying the possibility of the new owner building another story that would block the Adams’ view. Dakin tries to convince Carl to put a restriction on the building of a second story, but despite his affluence, Carl, on the advice of his attorney, refuses on the grounds that such a restriction could reduce the value of the home up to $300,000. The conversation and their friendship end badly.

Suddenly, Dakin’s well dressed stockbroker son Spencer appears and one immediately gets the sense of an outer-worldly presence that is woven in and out of the action. He acts both as Dakin’s alter ego and muse, becoming a sounding board for his dad’s conflicts. Macy has recurring nightmares in which she is unable to save her son from the horrible tragedy that took his life, along with the lives of thousands of people. Despite the subtle strain between them, and Ellen’s unspoken sadness, her concern for Dakin’s well being permeates throughout the play as she expresses alarm over the amount of time he spends on the computer and his growing obsession with losing their view which is perhaps a metaphor for the much greater loss he and his wife have experienced.

Rounding out this highly professional ensemble is Jefferey Stubblefield who plays the antagonistic Dan Gerard, the seemingly heartless, hard-edged new owner who buys Carl’s home on spec. He intrudes himself on Dakin and Macy to make friends, but is adamant about building a second story. Their potentially friendly relationship immediately goes south and Dakin is left more distraught than ever. As the play progresses, however, we get a glimpse into what Dan is really like and it is revealed that he was saved from a fiery death that profoundly changed his life. After that near-death experience, Dan divorced his wife and came out of the closet. One of the beauties of this play is that there are no “bad” guys. All the characters are fully actualized, sympathetic human beings.

The production values, for the most part, aid and abet the action, with a good use of the space by set designer Cliff Wagner who created an indoor/outdoor set. Lighting design by Brandon Baruch was sometimes less than adequate, while the un-credited sound design of mostly “smoky” music nicely enhanced the action and scene transitions.

The title of this powerfully written play was derived from ecologist Garrett Hardin’s essay “The Tragedy of the Commons, ” and the line “Any shared resources are inevitably ruined by uncontrolled use” is particularly appropriate to Metcalfe’s must-see play.

Soften opening for Jonah's Kitchen at 2518 Wilshire Blvd By Kerry Slater A farm fresh restaurant has come to Santa...