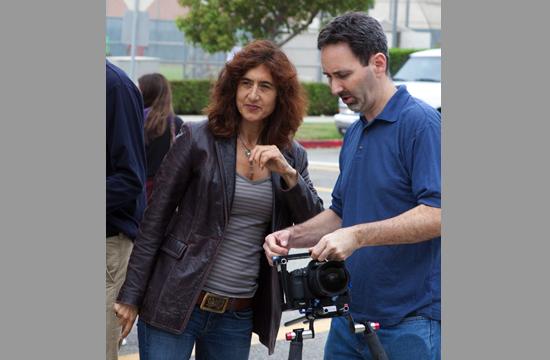 While millions follow the adventures of fictional high school students involved in music education on the TV series “Glee,” a real-life story of a dedicated music teacher and his students is unfolding at Santa Monica High School. The story is being captured in a feature-length documentary, now in production, called “Big Voice,” directed by award-winning local filmmaker Varda Hardy.

“Big Voice” follows SaMoHi choir director Jeffe Huls and his students as they study music, practice, and perform. A trailer for the film can be seen at Kickstarter.com.

“When I saw the Santa Monica High School Choir perform,” Hardy told The Mirror, “I was just profoundly moved. I couldn’t believe I was sitting in a high school auditorium. Being so moved, in that context I also observed the choir director Jeffe Huls. He carries himself with such dignity and such commitment.

“When I started to hear negative portrayals of teachers and public schools, the choir and Jeffe Huls came back to me. I felt that there needed to be a story told of an accomplished teacher– because there are many out there, not just him–and of a public school that’s working.

Hardy admitted that approaching Huls and the students in order to film them was a challenge.

“It takes a lot for someone to be willing to be in front of the camera like that. It took several months to find his trust. Part of what helped is we had the support of Santa Monica-Malibu Education Foundation which funds many of the arts programs in Santa Monica and Malibu. They knew me because I created a public service announcement for them: the Save Our Schools campaign. So they really had a sense of my capabilities and my commitment to arts education. They trusted me so they helped bridge the relationship between Mr. Huls and me.”

Although Hardy has shot some footage (some of which can be seen in the online trailer) she said that “Big Voice” will take about a year to complete. She wants to film live performances of Huls and his students.

“This is why we have the Kickstarter campaign. It’s going to take a lot more money to fund filming of the performances because of the equipment and crew,” she said.

Hardy’s outline for the film sees the performances interwoven with Jeffe Huls’s story: “How he became a teacher, his passion for singing,” as well as the stories of the students.

Hardy, who was born in England to South African and Rumanian parents, lives in Santa Monica and has two children in the SMMUSD school system. She has made two feature documentaries, one of which was distributed nationally on public television. Although her experience with television gives her “inroads in that arena,” she hopes to distribute “Big Voice” on the festival circuit and also theatrically. “I do see it as an entertaining documentary. That’s one reason I picked the subject of music.”

Hardy wanted to mention her colleagues on the project: Dennis Leight, the co-founder of Oliver Peoples Sunglasses, “He really believes in the project;” her producers, Marina Viscun and Deb Love; associate producers Karen Lavender, and Carol Coote; her company LiveTribe Productions; and her beneficiary: the Santa Monica-Malibu Education Foundation (SMMEF).

Although she acknowledged that the popularity of TV music contests and “Glee” might help stir up interest in her film, Hardy emphasized that

“[t]his is a very authentic story. It’s a very different reality. We have students who are very, very passionate about singing.

It’s incredible to hear them talk about how important it is in their lives.”

To contribute to “Big Voice,” go to http://www.kickstarter.com/projects/bigvoicemovie/big-voice-dare-to-dream before Oct. 10.