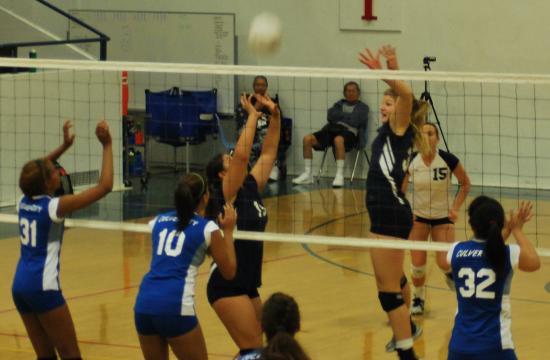 If anyone had just watched what SaMoHi did on the volleyball court, no one would have noticed the Lady Vikings were without its head coach on Thursday afternoon against Culver City.

With Liane Sato’s bench presence temporarily sidelined due to illness, the Lady Vikings still went about business in an Ocean League matchup against the Lady Centaurs, defeating Culver City in straight sets, 25-14, 25-22, 25-18.

Filling in for Sato was assistant coach Nguyen Trinh, who said the Lady Vikings still had some work to do despite solidifying itself atop the Ocean League standings.

“Our passing was little shaky,” Trinh said. “It wasn’t that consistent. We need to work on our first contact, the first pass, to allow our offense to be a little more spread out.”

What the Lady Vikings may have lacked in setting up the offense, they made up for with service runs and timely kills.

Trailing 8-6 early on in the first set, SaMoHi limited Culver City to just six more points the rest of the way en route to a 25-14 opening victory.

Riding the crest of Sarah Krenik’s kill to end the first game, SaMoHi jumped to a 5-1 lead at the onset of the second game. However, Culver City made a game of it and grabbed a 15-11 lead.

SaMoHi stringed together a second major service run to reclaim a 19-15 lead late in that second game, only to have the Lady Centaurs run off four straight points to tie the game.

The score remained close before SaMoHi finally pulled away with a 25-22 victory.

Culver City seemed to run out of gas in the third game, with the Lady Centaurs never really threatening SaMoHi en route to a 25-18 loss.

Trinh believed the Lady Vikings brought a little extra effort against Culver City, what with the Lady Centaurs being both a league and geographic rival. He also commended his girls on their servicing and defense.

“We actually served pretty tough and didn’t let their lead hitter get into a groove,” Trinh said. “They always seem to bring out the best in us. We always like to compete with them.”

SaMoHi will play its third game of the week against Morningside on Friday.