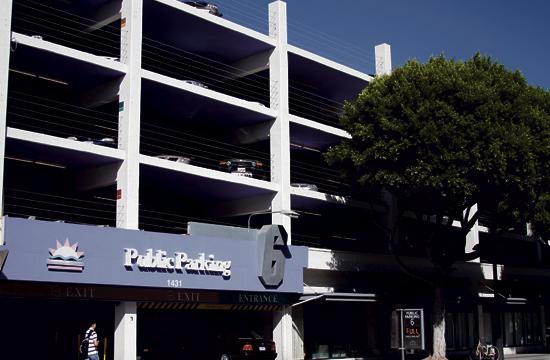 The Santa Monica City Council authorized the execution and delivery of a ground lease, property transfer, and bond issuance to free up $45 million at its Oct. 25 meeting in order to “finance a portion of the costs of the acquisition, construction, and installation of certain capital improvements” of Parking Structure Six located at 1431 Second St.

An act jointly made by the city council, Public Finance Authority, and Parking Authority, last week’s decision opens the door to issue a pair of bonds to finance a portion of the Structure Six project.

The debt-financing scheme not only facilitated the council to allocate funds for Structure Six, but also affirmed the city’s triple-A credit rating with Fitch Rating, Moody’s Investor Service, and Standard & Poor’s, respectively.

As part of the financing plan, City Hall will be issuing the “Series 2011 Bonds,” which have an AAA+ rating and will be used to both fund a portion of the Structure Six project as well as refund the Public Finance Authority’s outstanding “Series 2002 Bonds.”

“These bonds will be collateralized by a lease agreement for the right to use the City’s Main Library,” Acting Director of Finance Gigi Decavalles-Hughes wrote in a staff report.

Council member Bobby Shriver inquired whether this was the best strategy in securing financing for Structure Six. Noting record-low interest rates, Shriver pondered whether City Hall should instead seek a $45 million bank loan as opposed to issuing bonds.

Staff indicated bonds were indeed the least expensive means for debt financing with respect to the demolition and reconstruction of Structure Six.

“To finance the demolition and reconstruction of (Structure Six), staff and the City’s financial advisors reviewed available options that include various debt financing plans and current fund balance designations and reserves,” Decavalles-Hughes wrote.

“As a result, staff recommends utilizing approximately $9 million in pay as you go … funding, drawn from available balances in the In-Lieu Parking Fee Reserve ($7.5 million) and the Parking Authority Fund ($1.6 million), and issuing the proposed Series 2011A Bonds for the remaining funds required to complete (Structure Six).”

Structure Six is located on Second Street between Santa Monica Boulevard and Broadway. Morley Builders has been retained as part of the structure’s demolition and rebuild.

Highlights of the rebuild include: about 750 total parking spaces (compared to about 350 in the current parking structure); 28 total spaces dedicated to ADA vehicles; an estimated 7,000 square feet of retail space; 30 electrical vehicle charging stations; bicycle racks accommodating up to 90 bicycles and, solar panels on the roofs.

The project is actually part of a bigger plan that will also see the reconfigurations and demolitions to infuse more parking spaces into downtown.