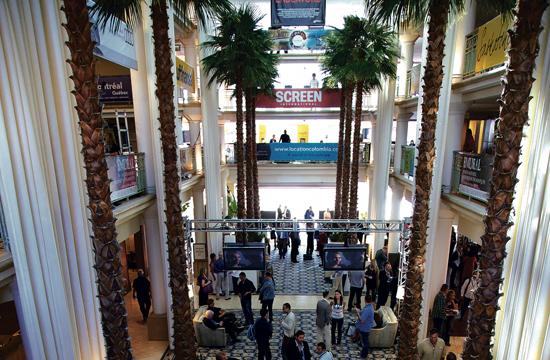 The American Film Market opened its doors in Santa Monica on Wednesday for the more than 8,000 industry professionals for eight days of deal-making, seminars, premieres, networking, and screenings of 415 motion pictures from 35 countries.

Loews Santa Monica Hotel at 1700 Ocean Ave. is the headquarters for the AFM with more than 300 exhibitors holding meetings in converted hotel rooms about film financing, production, marketing, distribution, and pitching.

Jonathan Wolf, executive vice president of the Independent Film & Television Alliance and managing director of the AFM, said overall attendance was up, but he said he wouldn’t know exact numbers until late next week.

“In a couple of categories, international buyers are running 10 percent ahead,” Wolf said. “Our general attendees, who are neither buyers nor sellers, are running about 20 percent ahead. We expect a full house and the hotels throughout the cities can attest to that.”

For the first time, Wolf said the AFM was hosting a five-day Conference Series that runs today through Tuesday, which would feature different topics each day at the Fairmont Miramar Hotel & Bungalows.

He said the subjects would span from treatment to screen and feature the industry’s global thought leaders, decision makers and experts, and 14 intimate, interactive and informative Industry Conversations led by visionaries, trendsetters, and experts.

“We’ve found tremendous take-up for the conference series,” he said. “They will all be full. We’ll have at least 600 to 700 people in every conference. We’ve just found from our attendees, they want in addition to the business going on, the educational part as well. They want to be kept up-to-date on a variety of topics that affect them.”

Santa Monica Conference and Visitor Bureau President/CEO Misti Kerns said the eight-day event was estimated to bring in about $16 million to the local economy.

“Well it fills us up, which we are always happy about, certainly during a time period which is considered our off season,” Kerns said. “The fact that it falls right before the holiday season, means we see a lot of people shopping and taking gifts back to their own countries.”

Next year is the final year of the current contract for Loews Santa Monica Hotel as the host venue of the annual AFM.

AFM is currently negotiating to make the L.A. Live district in Downtown L.A. the new home starting 2013 as it would lower costs for sellers and buyers, but there is no deal yet.

While Wolf remained tight-lipped when asked about the future location of the event, Kerns said the Santa Monica business community definitely wanted the AFM to stay.

“We would love for them to continue to call Santa Monica home,” Kerns said. “We think we offer the perfect destination for this group. You’re at the beach, you’re still a part of Los Angeles and that whole scene, but you’re apart from Los Angeles too.”

“We absolutely are intensely focused on delivering the exceptional experience for the client and the partners so that we continue to keep this market alive and well in the Santa Monica economy and community,” Leclerc said. “We want to continue to see them stay in Santa Monica.”

Loews Santa Monica Hotel began to slowly shut down its normal operations last Monday, Oct. 31. Lower level rooms were closed first so mattresses and box springs could be removed from its guest rooms to make way for office furniture and equipment rented by the AFM sellers. Mattresses and box springs from the final floors – seven and eight – were removed last Friday afternoon.

The American Film Market is one of the leading venues around the world, along with the Cannes Film Market, that assure independent films are financed.

“Everything that is being financed and licensed at the AFM is an independent film with big stars down to straight to video low-budget action movies,” Wolf said.

“This is how films are financed, how films get made, and how films also reach an audience.”