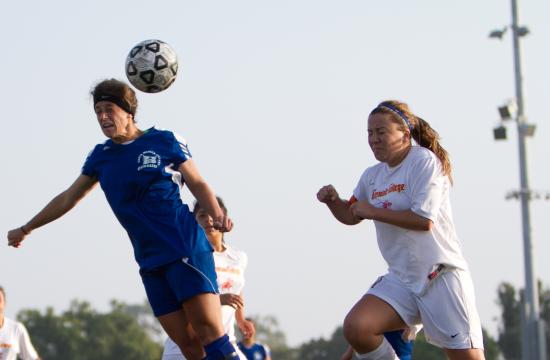 The playoffs are around the corner and the Lady Corsairs want in.

With three more games left on the regular season schedule, Santa Monica College (6-7-4) could end up with a winning record and a playoff berth if it continues playing at the level it has against Valley last week and then Glendale on Tuesday.

For the second consecutive match, the Lady Corsairs walked off the field with a dominating 4-0 win over a conference rival.

Four different players notched goals for SMC and the second team impressed the coaching staff with its execution as the Lady Corsairs proved too much for the Lady Vaqueros (1-16-1).

“When (the second team) went in today, they almost played the way we want our first time to play, in the sense that their execution was fantastic, the buildup was great, the ideas were there, and it was great to see them get in there,” SMC head coach Aaron Benditson said.

Interesting enough, the Lady Corsairs played a vast majority of the match on offense. Freshman goalkeeper Katherine Alvarenga did not face a legitimate scoring threat for the entire 90 minutes.

On offense, sophomore midfielder Sarah Barrington gave SMC the only points it needed with her first-half goal.

A trio of Lady Corsairs in Olivia Patterson, Sam Li, and Lilly Ruiz would add goals in the second half to round out the scoring.

The consecutive wins – and shutouts – could not come at a better time for Benditson and the Lady Corsairs, who effectively have to win out in its remaining three games in order to control its own playoff destiny.

“Our playoff season has started,” Benditson said. “I don’t fear anybody. We’ve played the best. We can make things happen, I think we know that.”

The Lady Corsairs conclude its home schedule on Nov. 8 against Citrus before traveling to Santa Clarita to face College of the Canyons on Nov. 11 in the regular season finale.