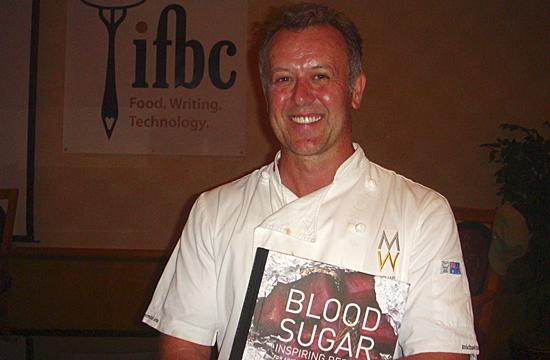 Moore said he was excited for the tweets and reviews being posted instantly online as bloggers ate each of his three courses.

“I’ve cooked for so many people all over the world my whole life,” Moore told The Mirror. “I know that I was going to cook something that tasted nice. The challenge was to get it out of the kitchen on time looking nice.”

Moore is one of Australia’s most experienced and respected chefs.

From humble beginnings in the UK, Moore started out in some of London’s best restaurants.

He is the chef/owner of Sydney’s most iconic restaurant, the Summit and has recently brought a taste of New York to Sydney with the opening of Reuben & Moore (sandwich bar & grill) in the new Westfield Sydney.

He said he had spent quite a bit of time in the United States this year and was impressed by what Santa Monica has to offer.

“I’ve been to the Santa Monica markets in June for the first time and I was just blown away,” he said. “Since it was summer it was full of fruit, it was just wow.”

For the past eight years Moore has been entertaining Australian audiences with his cooking skills — appearing on TV shows such as Mornings with Kerri-Anne on Channel Nine, The Today Show, Domestic Blitz, Sunrise, The Morning Show, Sydney Weekender, and The Boss Is Coming To Dinner.

He has also had a long standing relationship as guest co-host for one of Australia’s most popular cooking show Fresh on Channel Nine.

“I’ve traveled a lot with TV crews and visited different other markets, this one in Santa Monica is the only one that really feels like a farmers market and it’s great the truck opens up its side and stuff is there for sale,” he said.

“The greatest thing about a farmers market is the season, it reflects the season. That was my challenge with the meal tonight. It was to look like a collection of ingredients from the market, it wasn’t supposed to be puree this, puree that, and everything I’ve done to it, it was a reflection of what’s here at the markets.”

Course one for the food bloggers was a salad with cheese. The main course was a chili beef and tomato while the final course was ripe fruits with vanilla.

Moore said cooking simple food was the hardest thing to do.

“There’s nowhere to hide,” he said. “For this appetizer, there were 12 moves on that plate. When the plates went out of the kitchen, I wanted it to look like a room full of fresh food.”

For more information about next year’s International Food Blogger Conference, to be held in Portland, Oregon, visit http://www.foodista.com/ifbc2012.