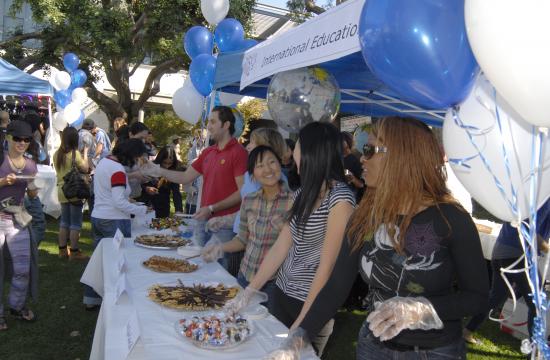 Santa Monica College is pulling out all the stops in this year’s celebration of International Education Week Nov. 14-18 with dance, music, food, film screenings, and an engaging lecture by Los Angeles Times film critic Kenneth Turan.

All events are free, and the public is invited.

“SMC has one of the largest international student programs in the U.S. with 3,100 students representing more than 100 countries.”

Kelley said International Education Week is “an opportunity to celebrate how our international students enrich our campus, our classrooms, our communities and our lives on a daily basis. SMC’s commitment to global citizenship is reflected in our curriculum, campus activities, study abroad programs, and diverse campus community.”

The lineup of events, all held on the main SMC campus at 1900 Pico Blvd., is:

Film & Discussion – “The Other Conquest” (“La Otra Conquista”). Written and directed by SMC film studies professor Salvador Carrasco, “The Other Conquest” is an epic film that brings to life the world of 1520s Mexico in the aftermath of the Spanish Conquest from the vantage point of the Aztec people. “The Other Conquest” became the highest-grossing Mexican dramatic film in history, receiving wide critical acclaim during its run in the United States and ranking as one of the Los Angeles Times’ Top 10 films of the year. A post-show discussion will be led by Carrasco, film studies professor Josh Kanin, and the film’s star, Damian Delgado (“Men with Guns,” “Law & order,” “Numb3rs”).

Film by Muhammad Yunus – “To Catch a Dollar,” which addresses how the global phenomenon of microfinance is helping grow new businesses in the U.S. The film follows the birth of Grameen America and the compelling story of the first borrowers and

Nobel Peace Prize winner Yunus as he brings his unique program to the U.S. (NOTE: This event repeats at 7:30 p.m. Friday, Nov. 18 in the same location)

SMC is one of the many organizations nationwide that will celebrate International Education Week, a joint initiative of the U.S. State and Education Departments.

Brayton said she agrees with Assistant Secretary of State for Consular Affairs Janice Jacobs’ on International Education Week 2011, in particular her point that “in today’s economy, it is essential that professionals in all fields have a knowledge and understanding not just of facts and figures, but also of foreign cultures and societies. When students from different countries and cultural backgrounds sit together in classrooms, whether in the United States or abroad, they exchange new ideas, break down stereotypes, gain knowledge of each other and their differing cultures, and make connections that last a lifetime.”