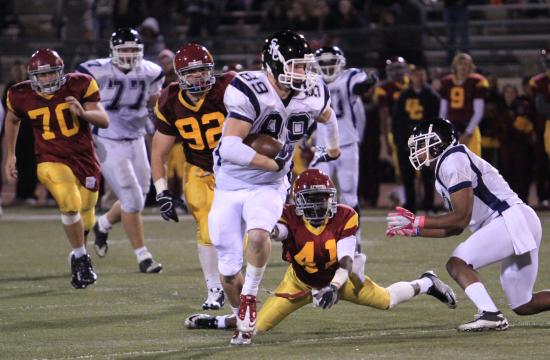 It isn’t easy being on the other side either.

While the Santa Monica College Corsairs (7-2, 5-0) have been in position to hold the opposition on the final drive three times this year, they have never had a full two minutes to win it with the ball in their hands.

Tied at 41 against Glendale, SMC quarterback Alfonso Medina took charge on the final drive. He completed 4-of-6 passes and got a crucial fourth-and-one on a quarterback sneak. He closed the drive with a deep 25-yard pass to Kris Comas to set up the go-ahead 23-yard strike to Brandon Taylor to take the 47-41 lead with only 13 seconds left.

“Medina was excellent in the final drive and I thought he played extremely well all night,” said SMC coach Gifford Lindheim. “He’s such a cool under pressure guy. He’s outstanding.”

A deep pass by Glendale’s Kevin Hunter on the ensuing possession was picked off by Corsair Clinton Perry to seal SMC’s win over the Vaqueros.

“We’re very mentally tough as a team,” Lindheim said. “We’ve won our last three conference games by a touchdown or less. We feel very comfortable about being in those situations. I think it shows.”

While shootouts usually occur with two gunslingers racking up ridiculously yardage, the Vaqueros instead relied on their 248 total rushing yards. Joseph Wiggan led all ball-carriers with 124 yards and two touchdowns while Timothy Broughton also crossed the goal-line twice. Omar Barrera-Sanchez compiled 89 yards and a touchdown on the ground as well. The quarterback Hunter threw for 177 yards and a touchdown with three interceptions.

SMC will finish the regular season at home against West L.A. on Saturday at 1 p.m. Both teams are 5-0 in the American Pacific Conference. Winner takes home the championship.

“Next week is for the conference championship,” Lindheim said. “It’s been 20 years since SMC has won one. I’m extremely proud of them and excited that they have a chance to win a championship and be remembered as a truly special team.”