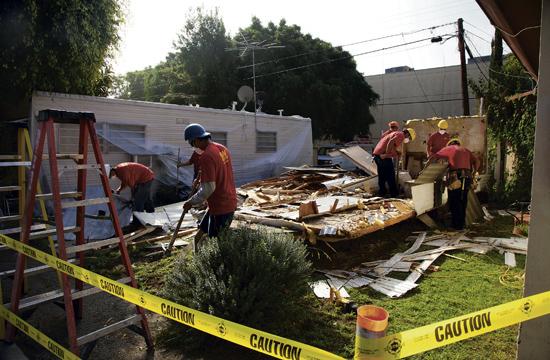 A construction crew arrived at Village Trailer Park at 2930 Colorado Blvd. in Santa Monica on Wednesday to commence demolition of several “unoccupied trailers.”

The demolition is the latest in a string of tense activity surrounding the Village Trailer Park area, which has been subject to heated debates at council and community meetings.

According to Catherine Eldridge, who has been a vocal proponent of saving the Village Trailer Park, the small construction crew had already demolished at least one trailer and it would take several days to knock down the remaining 10 trailers scheduled for demolition.

“These trailers are perfectly habitable,” Eldridge said on Thursday. “They (the construction crew) are still there as we speak.”

She said many residents at the park had to leave their homes on Wednesday and into Thursday as they had not been able to bear the construction crews and the demolitions.

Some of the demolitions are taking place next door to occupied trailers.

Residents expected the demolition to take place at a later date after the council further considered the issue.

Still, construction workers arrived at the Village Trailer Park on Wednesday and proceeded with demolition of several trailers.

“Most of the trailers look fine,” a Santa Monica area resident wrote in an email response to the notice sent out by the Village Trailer Park management team. “I don’t understand the rush to demolish them while people are still living next door (only a few feet away).”

Village Trailer Park is home to about 50 residents. Perhaps one of the most inexpensive locations to live within Santa Monica, the park is home to several families. Some are disabled and some are elderly.

Coincidentally, the park is located in an area ripe for new development, enhancing the property’s value.

Eldridge said many of the trailers being demolished were in ideal condition and properly registered with the State of California.

Demolition of the 10 vacant trailers was initially scheduled to begin Oct. 31, but was stalled when residents and neighborhood group leaders sent emails to city officials who acted to pull the demolition permit.

However, the council was split in deciding how to move forward with the park.

While Council member Kevin McKeown and several residents urged for preservation of Village Trailer Park at the Nov. 8 council meeting to protect those living there, both City Attorney Marsha Jones Moutrie and City Manager Rod Gould indicated the only way to circumvent legal challenges and keep Village Trailer Park untouched would be to have City Hall purchase the property.

The Village Trailer Park property is estimated to be worth $22-$30 million.