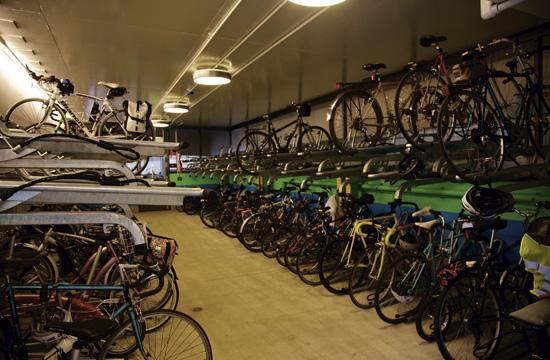 Any bike-riding enthusiast will likely tell you that when it comes to navigating a bicycle through city streets, the odds are stacked against you. To begin with, there’s not much of a contest between you on a bike and somebody driving an SUV. And streets are there for the cars, with bike paths and bike safety often integrated as something of an afterthought. This reality is a big part of what has motivated the new Bike Plan for our city, and resulted in a brand new Bike Center with two facilities in the heart of downtown.

I can tell you from first-hand integration with the facility that the new Bike Center locations are an impressive and comprehensive effort to make Santa Monica more bike friendly. Over the weekend, I rode my bike to the Bike Center on the corner of Second and Colorado to check things out and do so having just come off a fresh bike ride on our streets. Let’s talk about that for just for a minute first.

Riding from about Fourth and Ashland to the Bike Center by way of Fourth Street put me deeply in touch with some of those challenges to bike safety that I mentioned at the top. Drivers do pay attention to people on bikes, but there isn’t the respect for them that you’d get driving, say, a cement truck. It can feel like an act of faith to trust that the vehicle driver coming up behind you is going to cut you enough room to keep riding, pedaling as you are between parked and moving cars. White lines defining that clearance are great… but then you need to keep your eyes wide open to make sure one of those parked cars doesn’t have a door opening or that it’s about to pull out. Because of your placement in the view in their rear view mirror— if they do see you at all —you might be nearly invisible.

Then there’s the assumption about right of way, something akin to our laws about pedestrians always having the right of way even if they wrongly stroll out into traffic from some location that’s not a cross walk. It’s one thing to have a rule of thumb that bikes can position themselves in traffic like cars and get that respect. It’s completely another to trust that you will get that respect once you’re sandwiched between a bread truck and a family van with a driver checking their text messages.

But once you have made it to the safety and security of the new Bike Center, you’ll find an array of services that really gives one hope for a dramatic rise in bike riding in our town. Foremost, the center is a place to park your bike. Whatever your past experience has been with locking up to phone polls or other street fixtures, the Bike Center is an entirely different deal. Racks provide sturdy parking, and by using your own lock you not only have your bike off the street you have it secured inside the facility. By buying a membership in the Bike Center, you can use their showers and storage lockers. Commute to your downtown day gig on your bike without fear that you’ll be “pitted-out” with perspiration and present yourself at work looking like an extra in “Contagion.” You can shower and change when you get to the Center.

The Center also offers bike rentals and bike repair. A personal note on bike repair: All of us, but especially men, love to fix things on our own. A bike always seems like something one can just fiddle around with, putting on a little oil and perhaps making adjustments with a yank or a forceful tug. But take it from me there’s nothing like turning the work over to someone who actually knows what he or she is doing. A multi-speed bike derailleur may be a beautifully simple machine, but I found out the hard way that knowledge of exactly how it works can be invaluable when you go after it with a pliers. And don’t use pliers.

“We’re not Chevron” jokes Jeremy Rothschild of Bike and Park, the operational company that runs the Bike Center for the city, what he called “soup to nuts” management of the facility. And sure enough, unlike an oil company its website is mostly about promoting the healthy dimensions of getting out of your car and getting on a bike “for the benefit of one’s health, spirit, and the planet.” Since 2004, they’ve also operated the McDonald’s Cycle Center in Millennium Park in Chicago. Talking to Jeremy we were later joined by Cynthia Rose and Bryan Beretta of Santa Monica Spoke, the regional chapter of the Los Angeles County Bicycle Coalition. In highlighting the more treacherous moments of my ride to the Center, they pointed out that I was wrong to seek safety from the intersection at Fourth and Colorado by riding my bike on the sidewalk because there are share roads there, where as I stated earlier a cyclist puts themselves into traffic and hopes to be well-thought of by vehicle drivers. Oh, and riding on the sidewalk is illegal.

While group bike riders in other parts of Los Angeles gained attention for confrontations with police, all the bike advocacy energy in Santa Monica seems to have a pleasant sunshine and granola patina. I certainly enjoyed meeting the people at the Bike Center and everyone seems imbued with the knowledge that as the smarter species on the planet, we should be working on ways to transport ourselves that don’t involve burning hydrocarbons. Even better, riding a bike burns fat. And fat is a resource we have way too much of, especially as more of it is produced around the waistlines of our children. I own a bike and I ride it, but I haven’t been as good about taking it down from its hook in the garage, as I should have. Thanks to the new Bike Center, Santa Monica has now taken away some of my excuses. You’ll probably see more of me now, my backside on a bike seat. I’m apologizing in advance for the view, but… I’m pedaling and working on that.