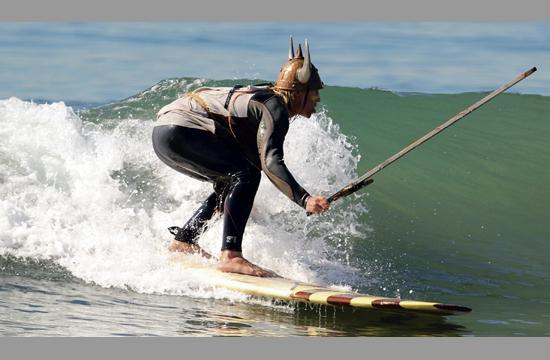 ZJ Boarding House, a popular Santa Monica surf and skate shop since 1988, was this year’s sponsor for the third year in a row. They gave out sponsor goodie bags that included event t-shirts and free meals courtesy of Wahoo’s fish tacos with all money raised going to breast cancer awareness and prevention.

“I hope it doesn’t get (too) heavy (out in the surf) because I am carrying my sword,” said Nick Oberlin who was surfing in the adult heat dressed as a Viking.

Oberlin unsheathed his sword and swatted at the air and waves while surfing.

“I’m Nick the Viking (today),” said Oberlin. “I was going to surf anyways and it’s Halloween, so why not?”

A nerdy nerd, who surfed at the event, lost his glasses out on the waves while shredding on his short board.

Besides the nerd’s loss, a general feeling of light-heartedness seemed to pervade the jovial atmosphere at the surreal surf event.

“I’m surfing as someone getting eaten by a shark,” said 15-year old surfer Maddie Lomonac, who had a shark head on top of her wetsuit, and went out in the 13-17 year old heat.

“I’m a little stiff,” said a Chia Pet who wished to be known only as a “Chia Pet” quoting the spirit of Halloween as his reason for anonymity.

The Chia Pet was dressed head to toe in a grass costume that even covered most of his face and his entire body.

“Water me, be patient, watch me grow, and give me love,” said the human shaped Chia Pet creepily. “Surfing takes a lot of flexibility.”

“That’s what Halloween’s about,” said a bandaged mummy in agreement with the Chia Pet. “I can be someone else. I am a surfer and surfing in a costume allows me to surf really even worse then I normally do. I can wipe out and have more fun then anyone else.”

“It’s a beautiful thing ZJ’s is doing,” said the Mummy. “We get all different generations and different age groups and everybody is having fun for a day and forgetting about everything else. It’s perfect conditions. It’s smooth and the sun is out and the waves are gentle.”

“It looks like there’s some pretty good competition,” said 16-year-old Sean Gard, who was dressed as Louigi.

Gard rode an 8’0” Wavestorm surfboard at the event and added character on his surfboard pretending he was driving it in the video game Mario cart on a few waves.

“I have been coming for the past few years,” said 17-year-old surfer Benjamin Iguchi who was dressed from head to toe as the color purple. “I heard about it at a local shop and have been coming ever since. It’s all about the fun.”

Other surfers such as The Haitian Dancer created their own style of surfing adding character to the sport of surfing.

Classics included a Haitian Dancer who danced on her board while she surfed and a young Batman who struck the classic Batman pose with his right fist in the air as he wiped out.

Notables included Ryan Unger, who was dressed as Your Mother, and who surfed in the adult heat wearing a blonde wig, a bulky white walnut necklace, and a blue and white floral dress. “I’m a hip mom and I am surfing today (because) it makes my sweat glands more comfortable. It’s nice to enjoy the day with my friends.”

Other memorable costumed surfers included a boxer who surfed in boxing gloves, a zombie, a mad cow, a surfing taco, an elf, a mermaid, King Kong, wrestler La Pantera, and Lt. Dangle from “Reno 911!”

Average surf conditions were around one and a half feet with a solid swell hitting around noon. A few dolphins swam playfully by during the middle of the Halloween event adding to the uplifting mood and spirit of the day.