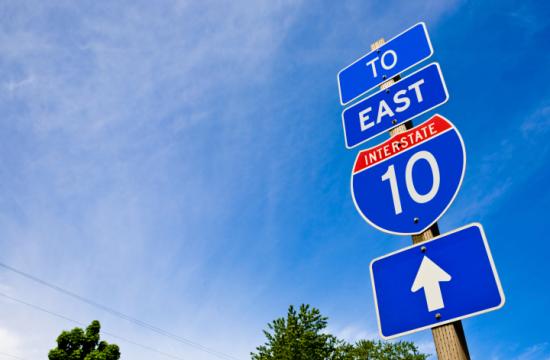 As City Hall continues to make its push to re-beautify Santa Monica, it would seem fitting to include the Interstate highway bearing the municipality’s namesake among its upgrade projects. Such an action is in the cards. On Nov.8, council members approved a consent calendar item to have Interstate 10’s signage replaced and improved from Santa Monica to its eastern border with Los Angeles.

Though it will cost City Hall $136,000, the updated signage is expected to improve traffic flow along the terminal stretch of Santa Monica Freeway.

City Hall will work with the California Department of Transportation (Caltrans) on the project.

“The signage along the Santa Monica Freeway (I-10) both westbound and eastbound, as well as other Caltrans facilities within the City limits has been found to be deficient by City and Caltrans staff,” Andrew Maximous, a transportation engineer at City Hall, wrote in a staff report. “At certain locations the deficient signage leads to incorrect lane use by vehicles exiting or entering the freeway. This incorrect lane use then leads to traffic congestion, on both I-10 and City streets.”

By working with Caltrans, the city hopes to “prevent last minute weaving at ramps, improve lane assignments, and reduce congestion through efficient lane use.”

• Eight designated locations in both directions of I-10 will be directly affected, including:

• Westbound I-10 at Fourteenth Street overcrossing;

• Westbound I-10 at Eleventh Street overcrossing;

• Westbound I-10 at Lincoln Boulevard overcrossing;

• Westbound I-10 at Centinela/Pico exit;

• Southbound Lincoln Boulevard between Colorado Avenue and I-10 on-Ramp;

RBF Consulting was awarded a contract to work with City Hall and Caltrans on the I-10 signage improvement project.

Caltrans is not providing any funding for the planned improvements. Instead, City Hall allocated funds in its Capital Improvement Projects (CIP) budget for the 2011-2012 fiscal year.

Accordingly, Caltrans will only “provide oversight to the design and will approve all construction documents and permits;” City Hall will manage the actual execution of the signage improvements.

Three firms – AECOM, Moffatt and Nichol, and RBF Consulting – submitted bids for the I-10 signage improvement project on Sept. 15. RBF Consulting was awarded the contract based on its past experience on similar projects is extensive and includes several freeway improvement projects such as the Artesia Freeway (SR-91) and Orange Freeway (SR-57) projects.

Scheduling and budget considerations were also factored into the selection process.