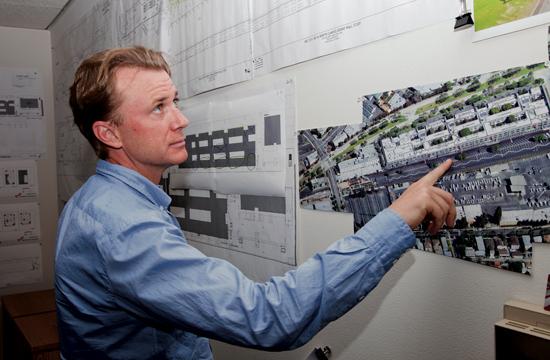 With the Expo Light Rail Line set to run through the Lantana Media Center in Santa Monica, the 12-acre business campus isn’t taking any chances when it comes to dealing with the construction noise starting in 2012.

Located at 3000 Olympic Blvd., the Center’s ownership is about to build a 1500-foot long wall to ensure its more than 40 tenants employing more than 1,500 people aren’t affected during the several years of construction that lie ahead.

Jacobsen said its Board of Directors was prepared and informed about MTA re-acquiring the land – and that’s why it began discussions with the City and planning its noise barrier wall about a year ago.

Now that Phase Two of the Expo Line is becoming a reality, he said things are falling into place to deal with the construction process.

“The big challenge, obviously, is that MTA is so compartmentalized,” Jacobsen said. “There are so many moving pieces, parts, and contingencies. What we’re doing is instituting a variety of capital improvements that will make Lantana an even better place to work regardless of what does or does not happen.”

Jacobsen said the Center and its tenants were thrilled the Expo Line would serve them once completed, but they understand construction must happen first.

“To help alleviate those concerns, we’re going to build a sound wall that’s roughly 1500 feet long by 12 feet high,” he said. “We’re literally going to build this highly engineered wall at the cost of $3 – $4 million, so for the next five years we have certainty of what the experience is going to be for our tenants.”

Gabriela Collins, Government/Community Relations Manager for Exposition Construction Authority (ECA), said a noise barrier wall would only be built next to Lantana Media Center’s property at the end of construction with the purpose to block out sound from operating trains, as detailed in the Final Environmental Impact Report (FEIR).

During construction, Collins said a number of sound mitigation measures would be implemented, opposed to building a noise barrier wall at the start of the construction period.

She said these initiatives included disabling back-up alarms on machinery and vehicles and using workers with flags instead. Sounds blankets would also be used to buffer and muffle noise when necessary.

“We also make sure we respond to any noise complaints or concerns and if necessary, adjust construction work hours to respond to that,” Collins said.

While the MTA is mandated to stay within construction noise limits detailed in the FEIR, Jacobsen said the Lantana Media Center had invested in its own sound studies to go one step further to ensure its tenants were not adversely affected during construction.

“We have our own acoustic team saying if you build this wall, you can mitigate the sound by x, if you add landscaping, you can mitigate it by y,” he said. “Even though we don’t expect it, we are prepared for the worst case scenario. We’re trying to quantify the unknown, and preparing for that will give people comfort.”

Since the Expo Line and its construction period will take away the parking lot, Jacobsen said the Center would hire another 25 valet staff to cope with the impacted parking.

Jacobsen said he encouraged other businesses that border the upcoming Expo Line construction zone to do their own research so they are not caught off guard.

Phase One of the line will travel from Downtown Los Angeles to Culver City. Service on Phase One is expected to begin by the end of this year or early next year, with service to the Culver City station in 2012.

Phase Two will extend the line out to Santa Monica and construction is scheduled to be completed by 2015.

In March 2011, the Exposition Construction Authority awarded the design-build contract for Phase 2 to Skanska-Rados Joint Venture. Major construction is scheduled to begin in early 2012.

The Exposition Construction Authority will hold a design update community meeting next Tuesday, Nov. 15, for Phase Two of the Expo Line project. Stakeholders will receive information on the design progress and will have the opportunity to view progress renderings.

The format will include a short presentation from 6:30 p.m. to 7 p.m. followed by an open house session from 7 p.m. to 8 p.m. to facilitate dialogue and community input.

The meeting will be held at the Santa Monica Civic Auditorium, located at 1855 Main Street, Santa Monica.