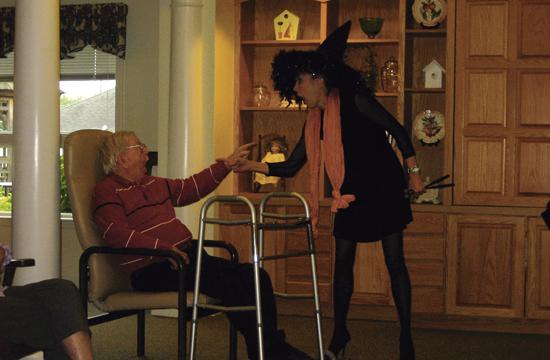 With great love and compassion, Santa Monica resident Cathleen Crone is regularly around the city, gently coaxing local seniors stricken with Alzheimer’s and dementia to a secure and comforting place in their past, one of jubilance.

Here she engages the elderly with artistic subject matter that they found joyous and rewarding during their healthy years when they were equipped with proper brain function.

“This is an enriching and enabling journey for those whose memories have become imprisoned and constrained,” Crone said. “These sessions are facilitated by the gentle sounds and overtones that are produced while ringing a unique configuration of Malmark Handbells, mounted upon a rack, so as to become a percussion instrument.”

Crone said patients and residents that she comes across respond positively to the routine and always recognize and remember her ample vocal prowess.

Crone said they laughed and engaged while participating in her light comedic routines and karaoke sessions.

“Those who regularly do not speak suddenly join in singing the correct lyrics to songs of their era, including multiple verses, flawlessly,” she said. “Testimony comes about freely and mantras are recited beautifully and interesting banter for discussion becomes plentiful.”

She said shortly after she arrived one day in early August and began her specialized handbell therapy for a patient who was prone, bedridden, visibly paralyzed, she said the patient began to “keep perfect time” with his feet to the beat of the music generated by her handbells.

The Malmark Handbell, which Crone uses as her tool for reaching and unlocking memories, has been manufactured in Plumsteadville, PA by Malmark, Inc. since 1969.

The Malmark Handbell is the brainchild of Jacob Malta, who passed away peacefully in his home in New Britain, PA on Aug. 9, 2010.

As an inventor and patent owner of all existing Malmark, Inc. handbells in the United States, Malta continued creating and improving upon his products until two weeks before his death.

It was with his blessing that Crone began formulating a specialized music therapy with this handbell invention, directly targeting those with Alzheimer’s and Dementia related disorders.

“Genuinely it is an overabundant privilege to be able to navigate the reclamation and recovery of memories lost, by promoting advancement of quality of life for these, our seniors, pillars of our community, intricate, handicapped gems of our populace and territory,” Crone said with an infectious smile and decisive demeanor.

Crone is seeking awareness and funds to make possible a clinical trial study program to define the measurable benefits of the use of the handbells and music therapy, upon the Brain of The Alzheimer’s Patient, to be conducted at Saint John’s Hospital in Santa Monica.

To become involved and to pose additional questions, contact Cathleen Crone by email at cathleencrone@earthlink.net or phone 310.390.1969.