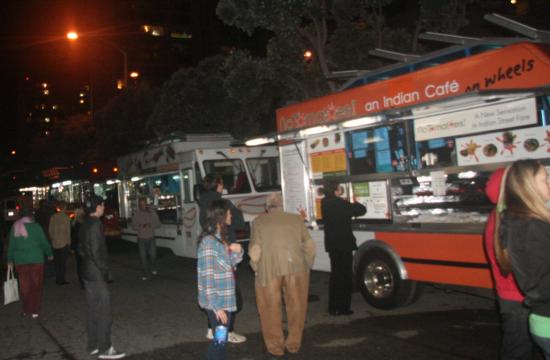 It will be lights out at an earlier time for food trucks servicing Main Street in Santa Monica, much to the dismay of late-night bar patrons with the munchies.

In a 5-to-1 vote, Santa Monica’s council members sided with the Santa Monica Police Department last week and approved a potential ordinance prohibiting food truck vending on Main Street between Marine Street and Ocean Park Boulevard between the hours of 1 a.m. and 3 a.m. on Saturdays and Sundays.

The proposed ordinance is expected to be in place just before Christmas.

“The impact of this increase in vending activities has been most acute on Main Street during late night hours, when food trucks operating near alcohol serving establishments attract large crowds of persons exiting Main Street bars during their closing hours,” Yibin Shen, the city’s deputy attorney, wrote in a staff report. “These large crowds create extreme congestion on the narrow sidewalks along Main Street, force pedestrians onto the roadway, and pose significant safety hazards to the public.”

SMPD’s deputy police chief, Al Venegas, pleaded with Council members that the food trucks trolling up and down the aforementioned four-block stretch of Main Street during the wee hours of Saturday and Sunday were a public hazard.

With the increased population on the streets, Venegas said SMPD has had to establish a greater presence in the area – four officers and one sergeant – in order to respond to noise complaints and other infractions.

“The population has increased significantly (because of the food trucks),” he said. They (the food trucks) cater to the clientele that are coming out at 1:30 a.m., two o’clock in the morning. What that does is it allows these individuals to stay for longer periods of time.”

Venegas said food trucks made it harder for police officers to do their job, as the mobile vendors often line up along the sidewalks on both sides of the street and inhibit SMPD units from visibly observing the area.

Beyond safety concerns, he also observed an increase in litter, debris, and jaywalking.

Not directly blaming the food trucks, Venegas also added that despite citations and arrests, the safety issues still exist.

Despite the time restriction, the new ordinance does not ban food trucks from the vicinity. Instead, between 1 a.m. and 3 a.m. on Saturdays and Sundays, the food trucks must relocate on Main Street north of Ocean Park Boulevard or south of Marine Street.

Not everyone thought the population increase was a bad thing. The sole public speaker on the issue said the groundswell of people in the area due to food trucks actually has great economic benefit.

Speaking at the dais on behalf of the Southern California Mobile Food Vendors Association (SCMFVA), Matt Geller hoped the council could ultimately strike a balance between public safety and economic benefit.

“While the food trucks are down there servicing those people, there has also been an increase in the popularity of Main Street area, which is good for businesses,” Geller said. “There are a few take out restaurants that are also in that envelope that you are creating that may end up being the go-to place after the food trucks have moved away. Your safety concerns may shift from food trucks to these to go places.”

According to the staff report, about 150 vending trucks are licensed to operate within Santa Monica’s city limits; the report also observed food trucks operating during late night hours has been “increasingly prevalent.”

“There are serious limitations on our local power imposed by state law,” Moutrie told council members. “In essence, state law allows us only to regulate in very narrow situations where there is a demonstrable safety risk imposed by food trucks.”

In light of Venegas’ presentation, City Hall believes the time restriction imposed by the ordinance was “the most narrow prohibition possible.”

Council member Terry O’Day cast the sole ‘no’ vote. He hoped to explore other options prior to voting on an ordinance. Not present at the Nov. 8 meeting was Council member Pam O’Connor.