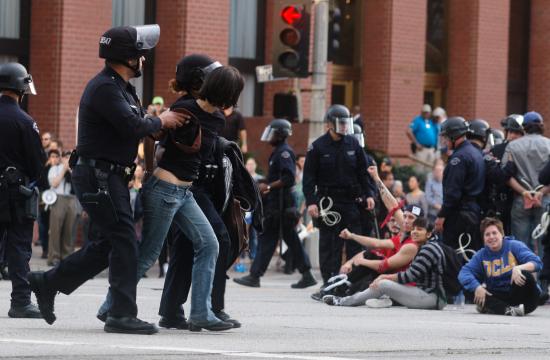 A protest at the intersection of Wilshire and Westwood boulevards today led to the arrest of 11 people who sat in a circle and refused to move.

A march organized by ReFund California started with about 200 people just after 1:30 p.m. at UCLA’s Bruin Plaza and moved to the intersection shortly thereafter.

The majority of the march participants stayed to the sidewalks, but 11 people who decided to sit in the middle of the intersection were arrested by police for unlawful assembly.

The intersection was reopened just before 4 p.m. – almost an hour after the disruption to traffic began.

Traffic gridlock flowed into Santa Monica as police diverted traffic around the intersection.