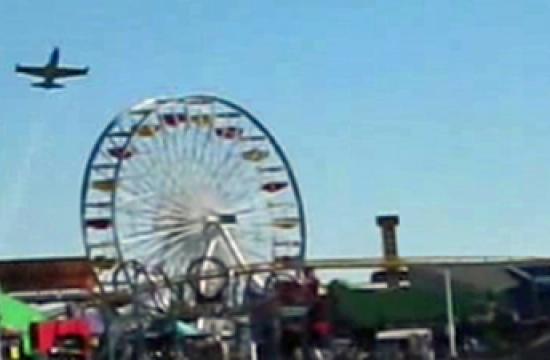 A little over three years ago, 48-year-old pilot David G. Riggs made low-level passes over the Santa Monica Pier to promote a movie his company was making.

Today, Riggs surrendered to authorities to begin serving a 60-day sentence, and was also ordered to clean beaches for 60 days and to pay more than $6,000 in penalties and court fees for the stunt that occurred on Nov. 6, 2008.

The conviction was for violating a provision of the California Public Utilities Code that is designed to protect the public from careless and reckless pilots.

During the stunt, Riggs flew a 1973 Aero Vodochody L-39 Albatros, a Czechoslovakian jet trainer that was popular in the Soviet bloc during the Cold War.

Video from those on and near the pier captured Riggs buzzing the pier at speeds of up to 350 mph.

Riggs, CEO of production company Afterburner Films, was promoting his movie about a maverick squadron of Americans and Russians on a secret mission to Iran.