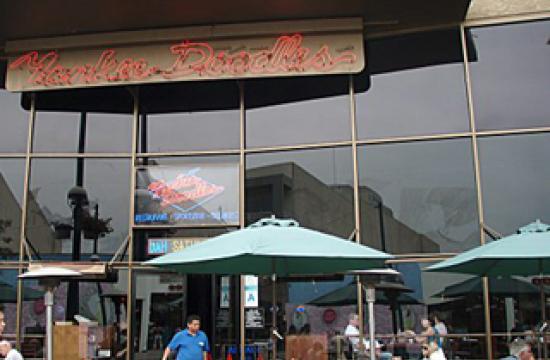 On Saturday, Nov. 5, at 7:37 p.m. officers of the Santa Monica Police Department who were on foot patrol on Third Street Promenade went to Yankee Doodles, located in the 1400 block of the Promenade, after receiving reports of a fight taking place there. As they were en route to the scene the officers learned that a Community Service Officer (CSO) was at the location and needed immediate assistance. When the officers arrived at Yankee Doodles they saw the CSO on the ground fighting with the suspect. Officers attempted to control the suspect, first verbally, and then physically, but this man continued to violently resist, so the officers deployed their taser, and tased him. He was then handcuffed.

The officers spoke with the manager of Yankee Doodles who told them that this man had been drinking in the bar. In fact he had been drinking so much that the staff told him he could not drink any more. The man appeared to be very disappointed upon receiving this news, so he went out onto the patio and decided that he needed to express his disapproval by challenging various patrons to a fight.

The manager had then escorted this heavily intoxicated man off the premises. As he was doing so this man charged at him and punched him in the face. Other employees took this man down to the ground, but this suspect continued to resist and actually managed to bite the manager on his hand. The officers then arrived and eventually took him into custody. Due to the fact that this man was very, very drunk, and had also been tased, the officers took him to a local hospital (physical, not psychiatric) so he could be checked out.

When they arrived at the hospital this man continued to fight with the officers and also the hospital staff, and even attempted to escape. The officers had to give him a second tazing experience to calm him down. The medical staff cleared him to be removed (leave, just leave) and so he was, and taken off to jail. This 36-year-old resident of Hell, I mean Los Angeles, was charged with obstructing officers causing injury, battery, assault, and public intoxication. His bail was set at $25,000.