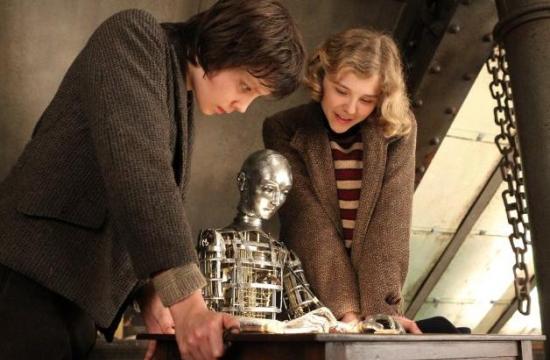 Set in 1930s Paris, Hugo Cabret (Asa Butterfield) is a 12-year-old boy living inside the walls of a big train station in the shadows of the Eiffel Tower in Paris after his father (Jude Law) dies in a fire. He is forced to live with his Uncle Claude (Ray Winstone), an alcoholic who teaches him to keep the clocks in time at the station, using a maze of tunnels and ladders to maneuver around like clockwork without being seen.

Hugo’s father leaves him a mystery in the form of an automaton – a self-operating robot resembling a human, and when wound up, is able to write a message.

In his journey to unlock his father’s message, he must fix the automaton, and resorts to stealing cogs, nuts, and bolts from a toy store at the train station. But when grumpy toy store owner Georges Méliès (Ben Kingsley) takes his notebook with all the schematics on how to repair the automaton, he begs and follows Méliès all the way to his home in attempt to get the notebook back, but without any success.

When the door is slammed in his face, he catches the attention of Méliès’ goddaughter Isabelle (Chloe Grace Moretz) who is looking out of her bedroom window. She sneaks out of the house and begins to help him not only on his journey to fixing the automaton, but finding a family while he gives her the adventure she had always been after.

Not all is smooth sailing for the pair as station inspector (Sacha Baron Cohen) is always hot in their trail.

The story’s setting lends itself to the element of space and depth, like a story teller, in other words to use it as narrative, because of the train station itself, entering the clocks, and the automation, according to Scorcese.

“All these characters are trying to connect to each other,” he said.

As his first 3D motion picture, he says the medium was able to give him the extra element he needed to tell the story.

“I’ve always dreamed of doing a film in 3D,” he said. “The story is something very emotional, funny at times, it’s like a celebration.”