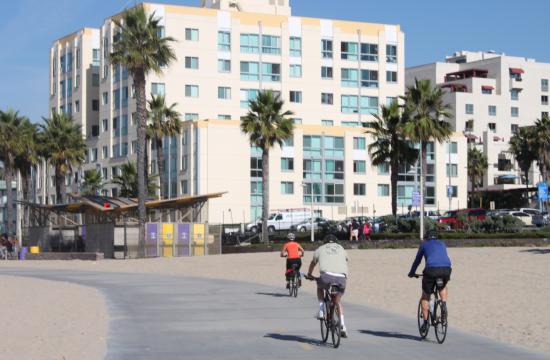 The wheels of the Bike Action Plan continue to rotate forward through the Santa Monica civic process, as the back and forth volley between the Planning Commission and City Council seems to be coming to an end.

After planning commissioners gave its thumbs up to the 400-page Bike Action Plan last week, the issue is finally headed to council members where the matter will be heard on Nov. 22 and determined whether it will be considered for adoption.

About three months earlier, the council had discussed the Bike Action Plan as part of a study session in August. The results of the discussion were sent back to the Planning Commission, which in turn worked on the plan and volleyed it back to council.

The consideration of the Bike Action Plan by Planning Commission last week and council members next week brackets the opening of the new Bike Station in the Downtown on Nov. 18.

With a groundswell of bicycle-related activity spawning from City Hall, Planning Commissioner Richard McKinnon said the timing of the Bike Action Plan and the Bike Center opening making headlines in Santa Monica is not coincidental.

“There was a surge in cyclists and more people were demanding more facilities. Now it’s a whole new world. Bikes are increasingly a viable way to get around,” McKinnon told The Mirror, adding the development of the city as being bike-friendly “well get us closer (to cities like) Portland, Seattle, and Madison.”

Adding that Santa Monica “is one of the densest cities on the West Coast” and about 70 percent of Santa Monicans have bikes, McKinnon said everything is in place for a viable Bike Action Plan to be executed.

Even more, the Bike Action Plan, which was developed within the confines of City Hall’s Land Use and Circulation Element (LUCE) master plan, should help Santa Monica make better use of its proposed bike lanes than Irvine in Orange County, which, McKinnon points out, “has hundreds of miles of bike lanes and no one is using them.”

Well, what has come out of the Planning Commission and is in transit to council next week is a 400-page document that essentially “has every (Santa Monica) street marked for a bike treatment” and has five-year and 20-year implementation marks.

Within the first few months of the five-year plan, the Bike Action Plan, if adopted in its current form, would add 19 miles of bike lanes and 14 miles of sharrows. Bicycle parking would also increase, with 800 on-street spaces coming in the first year and 2,500 total being added over the course of five years.

In addition to the Bike Station opening near City Hall, Santa Monica would also have the country’s first-ever permanent Bike Education Campus.

Even more, expect to see the addition of buffered green bike lanes running up and down Main Street from the city’s southern border with Venice through Downtown (Second Street) and then up to Montana Avenue.

The buffered green lanes would also be implemented east-to-west along Broadway from Centinela to Ocean, and as well along Ocean Park Boulevard from Lincoln to Main Street.

From a technology standpoint the Bike Action Plan seeks to add as many as 34 intersections will have bike video detection units connected to the citywide Traffic Management System.

Expect new signage to be installed along the beach bike path and connections to the Expo Light Rail line once it arrives in Santa Monica come 2015.

In all, City Hall will be spending about $8 million in planning, design, road improvement, special programs, community education, and grant funding, among other things, as it relates to establishing a viable bicycle culture in Santa Monica.

“A year ago there was no bike plan, no new money, no interdepartmental committee of the city,” McKinnon said. “So in a year the City has moved from a receptive place for bikes (but stationery) to a full on, flat out commitment few other cities in America can match.”