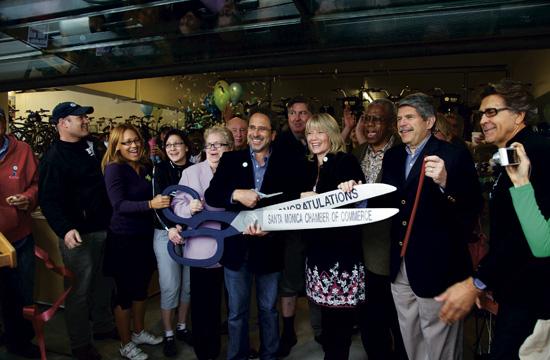 With all the talk of promoting increased bicycle use to improve traffic circulation in Santa Monica, the city finally showed it is ready to walk the walk – or, in this case, ride the ride – with the grand opening of the Santa Monica Bike Center last Friday.

In a red-ribbon cutting ceremony attended by city and county officials as well as key bicycle advocacy groups and community leaders, Santa Monica officially unveiled the largest-ever bicycle parking facility of its kind in the nation.

The Bike Center is built into the southwest corner of the Santa Monica Place parking structure. If the space had been designated for parking, it would only serve 27 vehicles.

The Center is built thanks to a partnership between City Hall, Los Angeles County, and the Metropolitan Transportation Authority (Metro). The 5,300 square foot Bike Center aims to increase bicycle use throughout Santa Monica and the immediate region. Once the Expo Light Rail arrives a few hundred feet away in 2015, the Bike Center will be an ideal location not only for dense bicycle use, but also for increased transit connections.

Santa Monica Mayor Richard Bloom said the timing of the Bike Center’s opening was the vital first step in stifling the city’s reliance on automobiles and making downtown more accessible.

“It’s all about connectiveness. It’s all about … making things easy so that it’s easier to get around without a car,” Bloom said.

He said he hoped the idea of a hub dedicated to bicycles would spread beyond Santa Monica.

“We’re a great incubator here,” he said. “We like to innovate. (The Bike Center) is a great example of that; it’s all well and good that we do things like this in Santa Monica, but … we’ll know things have really taken off when we see this replicated in city after city.”

Elaborating on the facility’s connectivity, Supervisor Zev Yaroslavsky explained how the Bike Center would open the floodgates for more cities within Los Angeles County to follow Santa Monica’s lead.

“Bicycles have become an integral part of our transportation system. Public policy makers such as myself are looking for ways in which we can better integrate bicycles into our regional transportation network. This Bike Center is one of the most significant developments along these lines,” Yaroslavsky told The Mirror.

“A template is being created here for the rest of the county. Santa Monica is willing to risk failure in the interest of having great success. This is going to be a huge success.”

Council member Kevin McKeown said the Bike Center, located on the corner of Colorado Avenue and Second Street, was reflective of Santa Monica’s can-do attitude. Arriving to the newly christened facility on his bicycle, McKeown said both he and his fellow Santa Monicans were rolling up the cuffs of their pants.

“I am particularly proud of Santa Monica today because whenever there is good work to be done, Santa Monica rolls up its sleeves. Today we rolled up our pants,” McKeown told The Mirror. “We’ve always been a trendsetter and we invite the communities around us to join the trend. Bicycles are the future of mobility on the Westside.”

The red ribbon ceremony was preceded by a symbolic bicycle ride around the civic center.