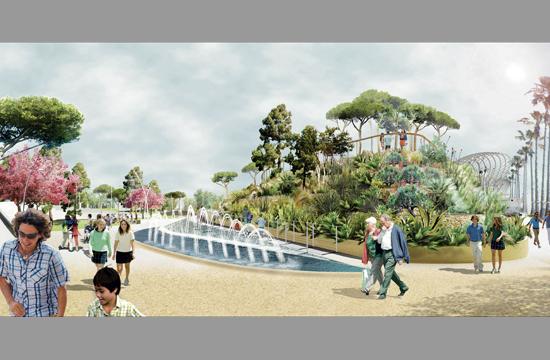 In addition to concurring with the Architectural Review Board’s approval of the design plans, council members also directed staff to proceed with construction documents for the project and approved the streetscape plans for Ocean Avenue and Main Street.

Main Street, for example, will soon feature an updated streetscape design calling for the installation of new street trees, street lighting, a redesigned median, and a raised crosswalk between the southern edge of the Main Street Bridge and Olympic Drive.

A series of Western Sycamores may replace nine existing Podocarpus street trees along the east and west sides of Main Street. The Podocarpus trees are being relocated within Santa Monica, either to another park or as part of another streetscape.

New streetlights are also expected to arrive along the stretch of Main Street touching PGW and will consist of an elegant arc shaped pole with a double luminaire, one directed to the sidewalk for pedestrians and the other to the street.

Another Main Street feature at PGW is a new raised crosswalk to replace the existing Main Street crosswalk adjacent to the central walkway of City Hall.

According to the design team, this raised crosswalk would be six inches above street level making it the same height as the adjacent curbs and flanked by planter areas and a redesigned planted median.

By raising the crosswalk six inches, the design team hopes drivers will have an enhanced view of pedestrians who would cross the stretch of Main Street separating PGW from Town Square Park.

Along Ocean Avenue, James Corner Field Operations and Peter Walker Partners will be working on a sidewalk-widening project at the corner of Colorado and Ocean Avenues, home to the meeting place of the PGW and Colorado Esplanade projects.

A public art piece for PGW is also in the works, as the Santa Monica Arts Commission directed Iñigo Manglano-Ovalle to bring his creative talents to the open space.

According to staff, Manglano-Ovalle’s preliminarily approved proposal, which will be located near the center of PGW, is “a sculptural ‘weather field’ consisting of a tightly grouped field of vertical poles, with each pole supporting weather instrumentation for measuring wind direction and speed.” The Arts Commission will consider the final design for approval in December.

With the approved design plans for the PGW Overlooks and streetscape design, City Hall will now work on completing the park’s construction documents by January. Come Spring 2012, rough grading, the compaction of imported soil, and permitting will take place.

Construction is expected to begin by June and be completed by Fall 2013.