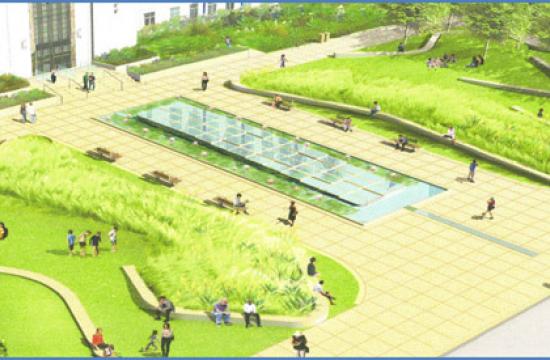 The Santa Monica City Council decisively stepped between an impasse between the city’s Landmarks Commission and the design team of James Corner Field Operations at City Hall on Oct. 25. While the Landmarks Commission had a different perspective from the project team, in the end the process was collaborative and resulted in changes that were endorsed by the Commission.

The only remaining design element in dispute was a set of decorative bricks at the City Hall entryway and the pathways.

The Landmarks Commission voted to retain the bricks in the park’s future plans, but city staff and James Corner Field Operations appealed the commission’s stance to council members last week.

Appearing at the council meeting to help make his case, James Corner urged members from the dais to grant the appeal and allow his design firm to move forward with its plans for Town Square Park.

He believed the bricks were outdated and did not properly fit with the more up-to-date “modern” design schemes.

Corner added that the park’s design ultimately aimed to create an atmosphere conducive to socialization, and such an environment, he believed, was established by the water feature and other changes.

While Corner maintained his company’s design plans should allow Town Square Park, which will be connected to Palisades Garden Walk across the street, to be a desirable destination, Landmarks commissioners believed the current brick design would strike a harmonious balance between Santa Monica’s history and future.

Speaking to council members on behalf of the Landmarks Commission, Ruthann Lehrer said her colleagues believed Corner’s design plans, while noble, may ultimately shortchange both the city and the park’s future patrons.

Lehrer hoped the council would not grant the appeal and instead allow the Landmarks Commission to review the design plans further in the name of improving Corner’s design plans.

“In the end, the process we have been through resulted in a much better project, one that balances historic preservation with modern design,” Lehrer told council members. “Having constraints in the design process is not a bad thing. In fact, it often leads, as it has here, to more creative invention in the end product.”

Accordingly, Town Square Park will take on the most recent iteration Corner and his design team proposed, which will not include the bricks.