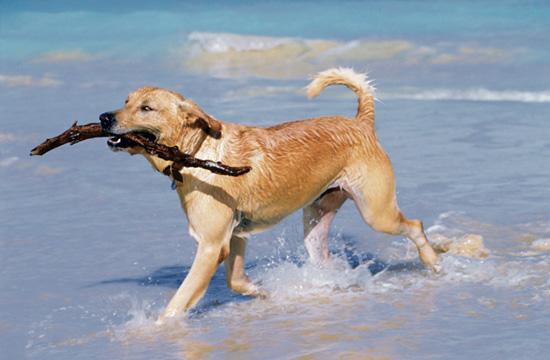 Dreams of a dog freely running along the Santa Monica coastline with a trail of splashing water in its wake have been put on a leash by Sacramento.

With the State of California winning yet another round of arguments on the issue, Santa Monica’s hopes of realizing a dog beach have been stifled yet again, City Hall announced.

It is the second time within seven years that Sacramento basically showed Santa Monica the door, or, in this case, the ocean. Accordingly, the status quo remains and what patrons of Santa Monica State Beach will continue to see is an image free of unleashed dogs freely roaming one of the most popular stretches of ocean water meeting urban sand.

“State Parks remains opposed to permitting any off-leash areas on State beaches,” Santa Monica Community and Cultural Services Director Barbara Stinchfield wrote in a memo. “As a State agency, State Parks maintains a consistent policy for all State parklands and this applies to the current position of no off-leash dog beaches.”

Stating that City Hall has made every effort to work with Sacramento to allow a dog beach pilot program to move forward, Stinchfield added the State’s reluctance to move forward is, at least partially, economically motivated.

“In light of staff reductions and budget cuts at the State level, it was made clear that there was no chance for a pilot program to move forward at this time,” she said.

Beyond finances, environmental concerns were also mentioned as a reason why Santa Monica State Beach may not realize unleashed dogs roaming around for many years to come.

“The concerns remain the same as those stated during the previous attempt to establish a dog beach in 2005,” Stinchfield said. “The risk to threatened species, such as the snowy plover, and to sensitive ecosystems, the possible threat to the safety of visitors, wildlife, other dogs, interference or displacement of recreational users, and health issues related to dog feces and dog urine in the water and sand (were all cited as key worries for not allowing a dog beach).”

Sacramento was not the only one citing budgetary and environmental concerns in allowing a dog beach along Santa Monica’s coastline.

Doug Gold, Heal the Bay president, wrote on a blog the local sands cost millions of dollars in taxpayer money as is to maintain, and adding a dog beach would only make it more expensive. Gold said more than $2.5 million was recently expended on a Santa Monica Pier cleanup campaign.

Gold also pointed out that while Measure V has helped improve coastal conditions at Santa Monica Beach, the water quality struggles to consistently meet standards for fecal bacteria, an issue that could potentially be compounded by unleashed dogs.

Gold added he would not be surprised if the dog beach became a hot issue again soon, though he hoped the next iteration, whenever or whatever it may be, would feature some basic characteristics.

“Like vampires, dog beaches seem to keep coming back from the dead,” Gold wrote on his blog. “I just hope the next dog beach proposal is for a fenced enclosure far away from the shoreline, children or sensitive wildlife.”

This latest attempt to bring a dog beach to Santa Monica was introduced to council members on Oct. 25. Then, council members voted 6-1 to direct staff to return with a pilot program proposal for an off-leash area for dogs to roam around along the sand down to the waterline.

If established, the pilot program would allow for City Hall to monitor the beach and water for potential environmental effects. If results were favorable, City Hall could have potentially made a case for a longer termed dog beach.