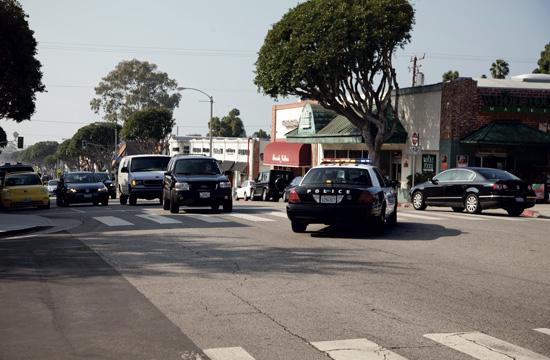 In an attempt to reduce pedestrian versus vehicle accidents, the Santa Monica Police Department has begun to step-up its enforcement of motorists failing to stop at crosswalks with various sting operations throughout the city.

Dozens of citations were issued during several operations last week, which involved an undercover police officer in plain clothes crossing an intersection for up to 90 minutes while officers kept a close watch from side streets.

When a vehicle failed to stop, a police officer on either a bike or in a patrol car would flash their lights and flag down each offending motorist to issue a citation.

On Tuesday, Nov. 15, officers conducted a sting operation in front of Urth Caffe at the intersection of Main and Hollister. Police issued 19 citations in just over an hour, mostly for vehicles failing to stop for the undercover police officer as well as other pedestrians attempting to use the crosswalk.

On Wednesday, Nov. 16, officers staked out the intersection of Wilshire and 18th for 90 minutes, which led to 26 citations being issued during the same type of operation, according to Santa Monica Police Department Sgt. Richard Lewis.

“They were for various violations, most of them were for not yielding to a pedestrian in a crosswalk and some were for illegal turns from improper positions,” Lewis said.

Earlier this month in a sting operation on Tuesday, Nov. 8, police officers issued 16 citations to motorists for traffic violations at the intersection of Wilshire and Ninth Street – another problem area within the city for vehicle versus pedestrian accidents.

“We’ve had complaints there from businesses and residents saying it’s been a dangerous intersection and they’ve been concerned and they wanted more enforcement,” Lewis said. “When the officers went out there and did it, they actually had people come out and say thank you.”

In a tally of from January 2010 to November 2011 of citations for traffic violations at intersections, 15th and Montana has accumulated the most with 217 citations.

Rounding out the top 10 intersections for most traffic citations issued were: Main/Pier with 45 citations, Main/Hollister with 43 citations, the Post Office on the 1200 block of Fifth Street with 29, 22nd/Pico with 27, Ninth/Wilshire with 25, Main/Bay with 23, Main/Kinney with 21, Fourth/San Vicente with 17, and 10th place was tied between Franklin/Wilshire and Ocean/Idaho with 15.

Lewis said these year-to-date totals were not from targeted sting operations, but rather these numbers reflected the most common intersections where officers have issued citations while on duty.

He said officers responded to various intersections throughout the year when residents and businesses complained about vehicles continuously failing to stop for pedestrians.