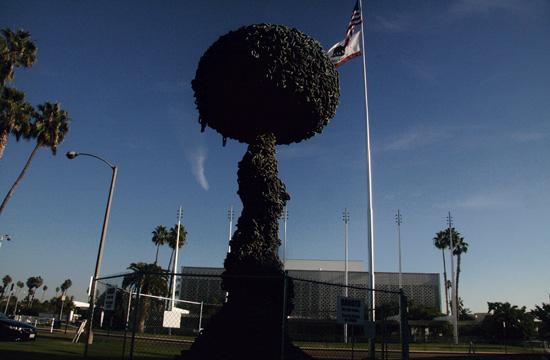 What was once a controversial sculpture designed as a statement of peace is now at the heart of a city-sponsored public art preservation campaign, as City Hall will be studying the structural integrity of Paul Conrad’s “Chain Reaction” across from the Santa Monica Civic Center.

The city’s Cultural Affairs office announced a team of structural engineers and art conservators will work together to assess Chain Reaction and determine whether the public sculpture has any threats to its structural well being, such as corrosion or other problems.

Once the testing is complete, City Hall will study the results and determine a plan of action on how to preserve Chain Reaction.

Next week’s structural integrity study is the latest in a series of actions to prevent Chain Reaction from becoming a public safety hazard.

The City has retained both a structural engineer, who is working with a well known testing lab, Twining, and a highly respected conservator, Rosa Lowinger, who has worked on important works both nationally and international, including for example the Watts Towers. Their work is independent, but complimentary. The contract with the conservator is for $10,000.

“From the time that a potential public safety hazard was identified by Building Officer Ron Takiguchi, City staff have worked diligently with a highly skilled team of professionals to devise and implement a plan that employs best practices to gather adequate information while doing everything possible to preserve the integrity of this important work of art,” Cultural Affairs Manager Jessica Cusick wrote in a release.

In addition to having an analysis conducted by a structural engineer and a conservator, City Hall also researched “the fabrication of the work” and interviewed those who originally built the structure more than 20 years ago. The results of the analysis and information gathered by the interviews dictated how next week’s tests will be conducted, Cusick stated.

Conrad’s family was also notified of the testing of Chain Reaction’s structural integrity. Conrad, who was a cartoonist with the Los Angeles Times, passed away in September 2010.

Chain Reaction was Conrad’s gift to Santa Monica with the $250,000 cost paid by an anonymous benefactor, but it was controversial.

A scale model of the sculpture was displayed at City Hall next to a ballot box, and visitors rejected it, 730 to 392. However, the Santa Monica Arts Commission unanimously voted four times to accept the piece, and the City Council finally agreed, voting 4 to 3 in favor of it in 1990. The sculpture was placed in its currently location in the shadows of City Hall, the Civic Auditorium, and the RAND Corporation headquarters in 1991.