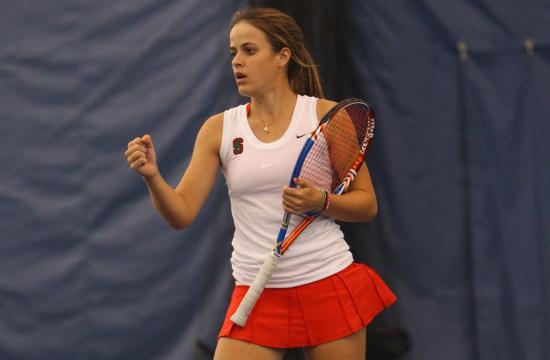 Santa Monica’s Nicole Gibbs has powered through to the semi-finals of the 2011 USTA/ITA National Indoor Intercollegiate Championships being held in New York this weekend.

The championships are being held at the USTA Billie Jean King National Tennis Center’s Indoor Building in New York, which runs through Sunday.

The event is the second-most prestigious event on the college tennis calendar behind the NCAA Championships, and is the most important event occurring during the fall semester.

Gibbs, now a sophomore at Stanford, said the quarterfinals match was a mentally challenging match as she lost to Bartenstein in the back draw of the All American in three sets last month.

“I was getting de ja vu in the first set and half; being down and the same patterns that were working for her against me in the All American were working again today,” Gibbs said. “But my coach told me some patterns to play and I was successful with them. She is a great defender. I am pretty proud of my effort tonight and though out this tournament. I am excited to play tomorrow.”

Gibbs’ career highlight was reaching the semifinals of 2011 US Open Junior tournament.

Her other career highlights include:

The most unique element of the USTA/ITA Intercollegiate Championships programs is the fact that all levels of varsity college tennis (NCAA Divisions I, II, III, NAIA and Junior/Community College) are competing in one comprehensive event, and any ITA varsity student-athlete has the opportunity to play and win at the prestigious USTA Billie Jean King National Tennis Center.

In all, more than 8,000 players from nearly 600 schools participate annually in the USTA/ITA Regional and National Intercollegiate Championships, and Columbia University will serve as this year’s tournament host.

Past winners of the NIIC include James Blake of Harvard, Todd Martin of Northwestern, Malivai, Washington of Michigan, Laura Granville of Stanford, and Lisa Raymond of Florida, while Mike and Bob Bryan of Stanford reached the 1998 doubles final.