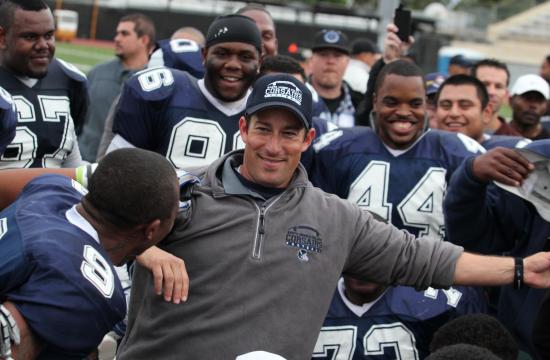 Lindheim – who took over as interim head coach in 2009, just after the team had been put on probation for residency violations – steered the Corsairs to an 8-2 overall, 6-0 in conference record this year. SMC faces off against East Los Angeles College at 1 p.m. Saturday, Nov. 19 at Corsair Field.

“I’m so proud of what we’ve been able to accomplish in a very short time in our football program,” Lindheim said. “I’m happy for the players that put their faith in what we’re trying to build, and the assistant coaches who share their expertise and spend tireless hours for little money. I’m thankful for the strong administrative support. I’m proud to be able to add to the many successes (academic and athletic) of our amazing college. The awards (Conference Champions and Coach of the Year) are organizational awards that reflect on all of our hard work. That’s what’s so cool about it.”

Lindheim has had a long career as a player and coach. He played at University High School in West Los Angeles, at San Francisco State University and with the Madrid Bears in the Spanish Football League.

Lindheim’s coaching philosophy is to combine firmness with fairness and to cultivate academic as well as athletic success, character growth, a strong work ethic and team work.

“With our academic support team,” he says, “each of our players has a plan to matriculate from SMC to the next level. We treat our players with respect, and we expect our players to go out and represent our program with class.”