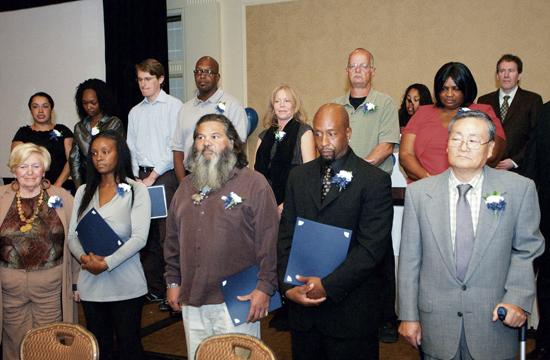 Twenty-three previously homeless individuals, who with the support of local nonprofit agencies, have made extraordinary transitions from homelessness to lives filled with passion and promise, were honored at the 16th Annual Celebrating Success Breakfast last Friday, Oct. 28.

The event was held at the Fairmont Miramar Hotel & Bungalows in Santa Monica.

“On any given night in Los Angeles County, an estimated 51,340 people are homeless,” said Dr. Va Lecia Adams, Executive Director, St. Joseph Center. “The numbers do tell a story, but we are here this morning to tell another story, to tell stories of success despite the numbers.”

LeShai Vaughn was among several honorees to speak to the full conference room at the hotel.

“I found out that I was pregnant, I was five and a half months. I lied to a lot of people and told them I was living with friends, and they never knew I was actually living in a hotel,” Vaughn told the audience. “My daughter and I stayed in a hotel for two years.”

That was until one day she finally decided enough was enough. With the assistance of the Venice Community Housing Corporation’s Westminster Transitional Living Center, she made it her goal to give her daughter a life that she didn’t have.

“I got hired from a temporary program that does on the job training,” she said. “A year later, I got hired. And the first thing that my daughter said when I opened that door, she said “Mummy, is this our house. Do we not have to move again?” I said “no baby, this is where we’re going to stay.”

Another honoree to share her story was Pari Lucero-Atwell.

“I was living in a car in Lancaster with my two daughters, and I was seven months pregnant,” Lucero-Atwell said. “I did lose custody of my children because I delivered that child under the influence. And that was my first day of recovery. So my five-year-old daughter and I have the same amount of clean and sober time.”

She said the CLARE Foundation gave her hope, security, and showed her how to live as a family and as part of a community – something she had no idea how to do.

Lucero-Atwell told the audience she has since successfully reunited and closed her court case with her children.

“I work as a parent advocate trying to help other parents regain custody of their children,” she said.

She said she had an obligation to herself, to her children, and to her community to show that it is possible to overcome homelessness one day at a time.