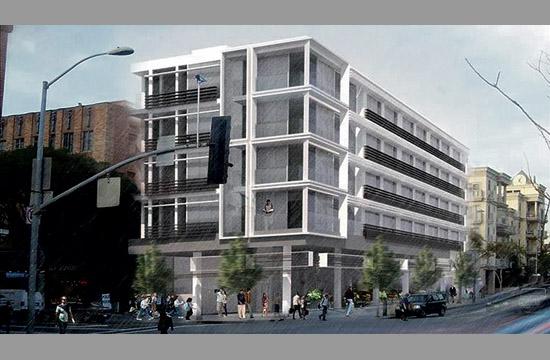 If you do not have a car, one new residential complex coming to the city may want you to live in it once complete. A Development Agreement (DA) unanimously approved by the Santa Monica City Council last Tuesday allows for a mixed-use development at 401 Broadway to be built without any parking spaces for its 48 studios and eight one-bedroom units.

The five-story development will be built on the corner of Fourth Street and Broadway, which will also feature more than 4,000 square feet of ground floor commercial space, and two-levels of subterranean basement space designed to include a commercial tenant and provide for residential amenities.

Come 2015, the mixed-use development will be within one block of the planned Expo Light Rail terminus station at the corner of Colorado Avenue and Fourth Street.

The latest DA also comes with a price for the developer to pay on top of standard construction costs. City Hall has issued a bill for $125,000 to the applicant for downtown infrastructure improvements.

According to the staff report, the applicant requested council members to limit the contribution for transportation improvement to $50,000.

Among the projects benefiting from the $125,000 contribution – which could have been as high as $175,000 – include the Expo Line and certain elements of the Bike Action Plan, such as the development of bicycle lanes in the immediate area.

Other community benefits are to include widened sidewalks, solar panels, and a local hiring provision.

The project will also have six on-site affordable housing units, each of them studios, at a monthly rental rate of $747. Market rental rates for the studios run $1,750 per month, according to the staff report.

Council members generally complimented the modern design of the development, which was designed by Michael Folonis.

Perhaps one of the biggest complaints of the development was the proposed monthly rental rate of studio units. Measuring at 360 square feet, the $1,750 monthly rent for a studio raised a red flag for Council member Bobby Shriver.

Shiver also pondered how parking would be accommodated for a development featuring 56 units and, possibly, a large restaurant.

Attorney Chris Harding responded by saying that once open, leasing priorities would be given to prospective tenants who do not have a vehicle. Even more, because the nature of the lot in its current state, building a parking lot would not be feasible, Harding said.

He also added there was plenty of ample parking in the area to compensate for the lack of parking at 401 Broadway.

Council member Terry O’Day was not present at the Dec. 13 meeting. Planning Commissioners considered the DA just a few weeks ago and approved it for council consideration. On Oct. 19, commissioners were deadlocked on the same development as they haggled over community benefits and unit sizes.