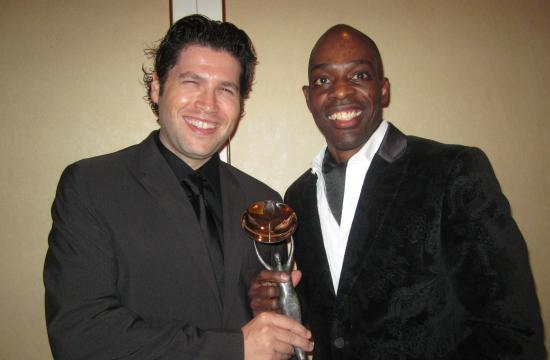 Kicking off the awards season, under the leadership of President Mirjana Van Blaricom, the International Press Academy held its 16th Annual Satellite Awards on Sunday, Dec. 18, at the iconic Beverly Hills Hotel. What might have been lacking in a huge turn-out by the high-profile celebrity winners, was more than compensated by the free-wheeling, informal, fun evening.

“The Adventures of Tintin: The Secret of the Unicorn,” scored in the Animated or Mixed Media.

Portugal’s “Mysteries of Lisbon” took the Foreign Film award, while the Original Screenplay award went to Terrence Malick’s “The Tree of Life,” and Adapted Screenplay to Alexander Payne and Nat Faxon and Jim Rash for “The Descendants.”

As a side bar, Dennis Haysbert won best Performance by an Actor in 2003 for his role in “Far From Heaven,” but couldn’t attend so he received his statue at this year’s event.

In the Special Achievement Award portion, comedy and wise cracks abounded with Carl Reiner presenting the Mary Pickford Award for Outstanding Artistic Contribution to the Entertainment Industry to Mitzi Gaynor.

He spoke at length about Gaynor’s career and on commenting about her adorable nose, Mitzi quipped, ”A nose like this could not be made by God.”

Reiner, 89, was honored later in the evening with the Lifetime Achievement award and talked lovingly about his late wife saying, “There is no end for the living when you wake up and say, ‘What am I going to have for breakfast.”

Douglas Trumbull received the Nikola Tesla Award in Recognition of Visionary Achievement in Filmmaking Technology for his body of work which includes “2001: A Space Odyssey,” “Close Encounters of the Third Kind,” “Star Trek: The Motion Picture,” “Blade Runner,” “The Tree of Life,” “Silent Running,” and “Brainstorm.”

Looking quite glamorous, long-time entertainer to American troops, Connie Stevens, gave a heartfelt speech as she presented the Humanitarian Award to ex Staff Sgt. Aron Hijar, who accepted on behalf Tim Hetherington, a beloved British photojournalist who was killed in Misrata, Libya.

Throughout the evening, the one and only Cloris Leachman shouted out her unsolicited opinions and reactions, making snoring sounds during the short film on Peter Bogdanovich who was receiving the Auteur Award.

He made a sweet speech in which he quoted Jimmy Stewart as saying regarding film, “You give people a little piece of time they never forget.”

The prestigious Best Educational Motion Picture award was accepted by producers Richard Harding and Sam Feuer for “The First Grader, an inspiring, stirring true story about an 84-year old Kenyan villager and ex Mau Mau freedom fighter who fights for his right to get the education he could never afford. According to one of the producers, the film was a lead contender for the 2012 Producers’ Guild of America’s Stanley Kramer Award but lost out to Angelina Jolie’s “The Land of Blood and Honey.”

It’s not too late for an Academy Award nomination.

Television awards were also given out for “Mildred Pierce,” with Kate Winslet winning Actress for a Motion Picture Made for Television, and Jessica Lange for “American Horror Story. Peter Dinklage and Ryan Hurst won for their Supporting Roles in “Game of Thrones” and Sons of Anarchy” respectively. In a Drama Series, Claire Danes won for “Homeland,” Timothy Olyphant for “Justified,” and Vanessa Williams for her Supporting Role in “Desperate Housewives.”

After the awards ceremony, dinner was served followed by lots of table hopping so fellow actors like Timothy Bottoms, Ryan Hurst, and Tom Sizemore could catch up with each other. Those stars that didn’t or couldn’t show up missed out on a wonderful awards ceremony and a heck of a party. As the most wicked nurse in cinematic history, Louise Fletcher, of “One Flew Over The Cuckoo’s Nest” fame said, “I don’t know how to compete with this crowd except to have another drink.”