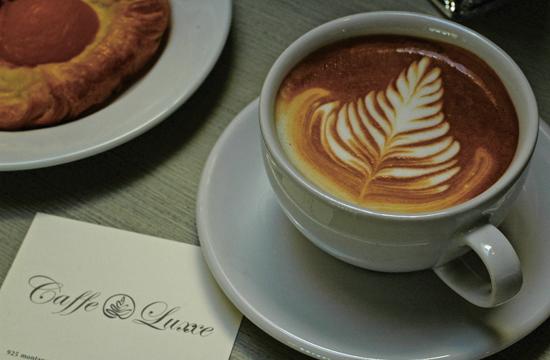 A cup of coffee is serious business at Santa Monica’s Caffe Luxxe, an artisanal coffee/espresso bar that’s a far cry from the mega chains such as Starbucks.

When Caffe Luxxe opened on Montana Avenue in 2006, it was among the first of a new type of specialty coffee house that raised the bar for coffee drinking in Los Angeles. These independent shops approach coffee making with the same obsessive degree of attention given to the production and appreciation of other fine liquids like wine or single malt whiskey.

“When we first started, it was an educational process because no one had this kind of coffee; it was a relatively new style and level of coffee experience,” said co-owner Gary Chau.

Caffe Luxxe’s baristas can go through months of training to learn how to make a good cup of coffee. They wield a short “double ristretto” extraction style that helps give the signature espresso ($3) its traditionally Italian dark chocolate/caramel flavor. The baristas also hand-pour single-origin drip coffee ($5 to $12), made with beans bought in micro lots from independent farmers instead of from commodity distributors. Currently the cafe is serving a Nicaraguan Bella Aurora and an Ethiopian Sidama Rophi, a bold bean that has a “medium body, hints of blueberry and honeysuckle, and silky finish.”

Complementing the coffee is a small selection of macarons, alfajores cookies, sandwiches, fresh juices, and pastries from Red Rooster, which is a bakery of local veteran restaurateur Bruce Marder.

The steamed milk in lattes and cappuccinos ($4 to $5.75) is skillfully poured in a pretty rosetta leaf design that is the barista’s finishing signature. It takes an experienced barista to craft this milk foam art, and baristas from all three Caffe Luxxe locations compete for the title of master barista artist at a friendly rosetta-making contest held semi-annually at the Montana Avenue store.

“Everyone here tonight is a customer and a friend, so I felt very comfortable performing in front of them,” he said. We’re very close to our customers.”

Last week, actor and barista Yaniv Rokah performed a scene from the Donald Margulies play “Time Stands Still,” to an overflow audience of loyal customers who came to support the acting performance of the barista who makes their daily coffee. Rokah was joined on the stage by actor and cafe regular Haskell Anderson.

Chau and business partner Mark Wain are the driving forces behind Caffe Luxxe. Wain has Argentinian roots and grew up around coffee, while Chau grew up in Hong Kong and Bangkok and was inspired by the coffee culture he experienced while living and traveling in Europe. They met when they were students at the University of Southern California’s Marshall School of Business. After stints in the corporate world – Wain worked at Citibank, Symantec and Microsoft, while Chau most recently was global marketing director for the beverage company Bacardi. The two joined forces to embark on their own business.

The newest Caffe Luxxe outpost is at the Pico neighborhood farmers market on Saturdays.

At this outdoor location, Chau fine-tunes the grind depending on the day’s temperature and humidity, making sure the flavors come through.

“I love to see the expression on people’s faces when they have their first sip of coffee,” he said.