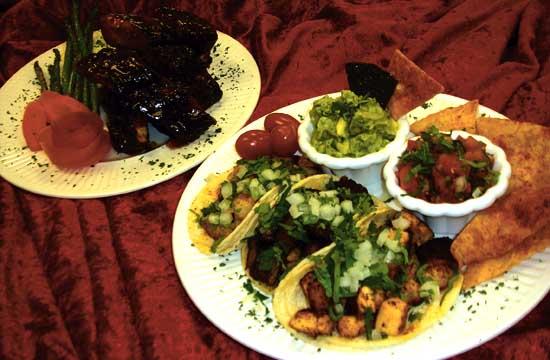 Marla’s Cafe is somewhat of a local insider’s secret, known mostly by word of mouth. It keeps a low profile in a part of Venice on Abbot Kinney Boulevard that’s well off the beaten track, in a neighborhood that’s part residential and part commercial.

The cafe is run by Marla Barreira, a Wisconsin transplant who moved west, traveled throughout Europe in a camper, and then worked for decades in the catering and party planning business. The grueling demands of putting together big corporate events for thousands of guests all around Los Angeles gradually took their toll, and she realized that she wanted to shift her focus to the part of the business that’s closest to her heart: cooking.

“People love my food – my food is good. I’m very proud of it,” says Marla, an amiable chef who enjoys taking care of her customers. “A lot of cooking is about love, caring, loving good food.”

The cafe is actually an outdoor space that Marla has fashioned into a fully enclosed dining area next to the catering office. Walk to the side of the building, pull open the curtain, and when you step inside you’ll know you’ve entered a one-of-a-kind place. The decor is devised out of catering props, with assorted glittery fabric around the room’s perimeter and a ceiling of big canvas umbrellas. Potted plants, mirror balls, twinkle lights, and miscellaneous statues add eccentric touches that make the room feel like an intimate hideaway.

The pride and talent that Marla brings to the kitchen are evident in the menu of small bites, soups, salads, sandwiches and wraps, entrees, pastas, pizzas, and desserts.

The guacamole and chips ($6.99) are a standout. The tasty chips are made of flour tortillas seasoned with savory spices, and fried until they’re crisp, but not greasy. There’s no filler in the guacamole – just fresh avocado and seasonings. The combination of the two is a good example of quality ingredients prepared in a way that adds up to more than the sum of the parts.

Home made soups ($6.99) are made from scratch with pureed vegetables. No dairy or filler is used, so the flavors shine brightly. There are half a dozen daily soup choices; some of the more popular ones are the tomato basil, corn, spinach cilantro, and lentil soups.

The baby back ribs ($16.98) are famously juicy. Another top seller is the steak sandwich ($14.98) made of sliced filet mignon, sauteed mushrooms, onions, and garlic aioli. Sandwiches are served on home made bread, and the freshly baked dinner rolls are exceptional.

Marla says she tries to eliminate as much fat as she can and doesn’t use cream or butter in her cooking, with the exception of butter in the mashed potatoes. “You need butter in mashed potatoes,” she says. She believes in letting the flavors of the ingredients speak for themselves.

After dinner, complimentary homemade cookies are served for dessert. Marla likes to come out of the kitchen and say hello to her guests, making them feel comfortable and welcome. Her son, Danny, is a gracious host and server.

The café’s patrons come from the surrounding neighborhood and beyond. Santa Monica resident and massage therapist Vaia Potter, who was dining with a friend recently at Marla’s Cafe, told The Mirror she came back to the cafe after first going there on a date.

“My date told me the cafe is kind of a secret,” she said. “It’s really nice and cool; I like it. Marla’s a very good chef.”