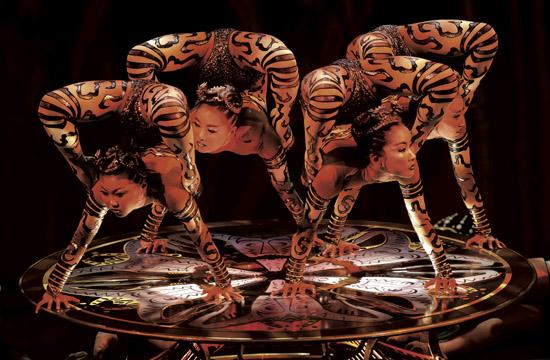 As the home of the Academy Awards, the Kodak Theatre on Hollywood Boulevard is the perfect setting for Cirque du Soleil’s newest major resident show “IRIS,” which looks at the evolution of cinema through astounding action and effects.

Since September, the show has been stunning audiences with its acrobatics that are so precise and gravity-defying, that it’s sure to create plenty of sweaty palms and pounding hearts throughout the show.

At the heart of the story is Buster, a sad composer in search of true love.

Somewhere between reality and make-believe, he spots the girl of his dreams: Scarlett, a naïve actress who longs to become a movie star.

The pair find themselves plunged into the joyful chaos of a film set. Their escapades transport the spectator into a kaleidoscope of movement, moods, and images supported by an orchestral score composed by Danny Elfman.

Written and directed by French director-choreographer Philippe Decouflé, the show begins by rewinding back to the concept of shadow puppets on prehistoric cave walls.

In an atmosphere of light and shade, two acrobats set the bar for the show as they soar through the air suspended from straps. They take off high above the stage and land with grace and fluidity, delivering a performance that makes one think of an aerial hand-to-hand number.

Back on the stage, four contortionists adopt striking poses that are mind-bending. The flexibility of their movements is amazing as they are transformed into living sculptures.

What makes each Cirque show like nothing else on earth is its impressive attention to detail in choreography, which is full of high-speed precision.

In the act “Filmstrip,” performers advance from one “frame” of film to the next, quickly moving through doors into side-by-side rooms that creates the illusion of continuous movement.

At the Hollywood Bowl’s 90th season opener earlier this year in June, the Kiriki act was performed as a teaser of what “IRIS” would deliver during its 10-year run at the Kodak Theatre.

This act features colorful performers that could be mistaken for bright Teletubbies that blur the lines between reality and the impossible as they take turns lying on their backs and spinning fellow acrobats above them using their hands and their feet.

Just when you think they have done it all, the eight performers stack themselves several bodies high, before the acrobat at the top launches into a spin and makes a perfect landing.

After intermission, controlled chaos returns in the form of the act “Movie Set” that had the theatre roaring with amazement. Nearly all of the production’s 72 performers take to the stage for successive highly visual numbers and audacious plunges that are a bold allusion to various aspects of filmmaking.

The wonder continues in the trampoline act that’s a tribute to gangster movies and to the work of stunt actors. The trampolinists deliver a number packed with thrills on the roofs of buildings, multiplying their astounding leaps, flips, and glides in a non-stop action movie atmosphere.

This number vibrates with bright saturated colors and the sharp contrasts of shadows and silhouettes.

After so much excitement, there’s a complete change in pace in the next act when the show’s heroine Scarlett balances on canes.

She performs a number infused with romanticism, subtlety, and sinuous strength that captures the already conquered heart of Buster.

The final act revs back into top gear as it pays tribute to 3D movies. An aerial bungee ballet takes place more than 100 feet above the audience. These women in crystal studded costumes dive and soar in unison from the ceiling with thrilling, swirling flight.

Many of the show’s props have taken on a life of their own. Resembling the contents of a cabinet of curiosities, they are variations on the themes of sound, optics, light, and smoke. These little devices represent the beginnings of cinema and the mechanical inventions that made its development as an art form possible. Light sources and ingenious machines, as well as panels, ladders, beams and chairs, take on personality traits, transforming them into characters that give life to the artists who operate them.

Elfman’s music for “IRIS,” which is primarily orchestral, combines both large and small ensembles throughout the show.

Its melodies contain references to many genres of film – at times grandiose and stirring, at times playful and light, sometimes surrealistic, frequently action-packed, and often humorous and surprising.

By combining this music with dance, acrobatics, live video, film footage, and interactive projections, the show succeeds in illustrating both the mechanics of cinema and its extraordinary power to deceive the eye.

The name of the show “IRIS” is taken directly from both camera diaphragms as well as the colored iris of the human eye.

Tuesday through Friday at 8 p.m.