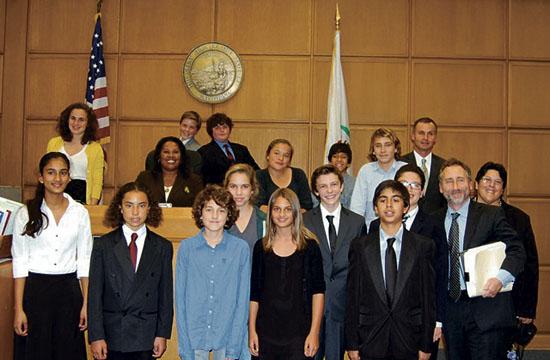 No parent wants to see his or her eighth grader in a courtroom. Unless, of course, they are participating in a mock trial.

By the time it was over, JAMS claimed a top four finish in the 34th Annual Mock Trial Competition after reaching the semifinals. Though falling short of earning a slot in the county championship round, JAMS outranked 36 other schools en route to the competition’s final four.

Surviving four rounds of competitions, the 16 students of JAMS were up to the task of trying a murder case in front of a real judge as part of the final four event, going toe to toe in the halls of justice in Downtown Los Angeles.

With actual attorneys monitoring and scoring their performance, JAMS took to the defense in a simulated murder trial of a college student who allegedly killed a friend in order to protect an inheritance of $20 million.

In preparation for the competition, the 16 JAMS students endured several months of rigorous law-school like training.

Even more impressive was that this is just the second year JAMS has participated in the Mock Trial competition. Other participating schools have been participating for many years. Some other schools even offer mock trial training as part of formal curriculum.

However, at JAMS, the instructors and students trained for the annual competition after school, in addition to their normal responsibilities in the classroom or the workplace.

The team, which featured students hand selected by JAMS Principal Eva Mayoral, started off with eight meetings during the summer, followed by weekly meetings, then biweekly meetings once the competition started. In addition, the 16 students had to complete intensive research and homework, on top of their normal curricular responsibilities.

“It’s all local participation. What we do is take kids who are really dedicated and they have to prepare a lot,” Bill Sadler, the team’s coach, told The Mirror, adding the mock trial experience gave students an “opportunity to think outside their realm.”

In the end, the rigorous training and extra effort paid off.

“One of the judges said that one of our lawyers was as good as he has ever seen in a courtroom,” Sadler added.