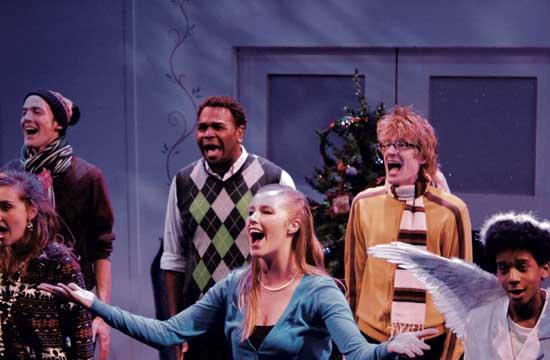 The Christmas season has arrived in Santa Monica with “Mrs. Scrooge,” a musical stage adaptation of Charles Dickens’ “A Christmas Carol,” which is being presented by the West of Broadway Theater Company through Dec. 24.

The musical is written and directed by Santa Monica-based children’s book author and filmmaker Diane Namm who tweaked the timeless tale into a 21st century comical masterpiece.

In doing so, she has accomplished a highly original musical similar in the methodology undertaken by Tom Stoppard’s “Rosencranz and Guildenstern Are Dead,” who rewrote Shakespeare’s “Hamlet” in the 1960s.

Namm’s adaptation of “A Christmas Carol” injects a children’s twist by inventing Mrs. Scrooge as the lead character, a grumpy lady who hates Christmas.

The musical is filled with singing, dancing, and compelling Christmas cheer that will soften even the grumpiest of spirits.

The musical is simple and smashes any outdated expectations by introducing another new character – Teen Angel.

“As a children’s book author, I adapt classic tales for a young audience, and respectfully stay true to the style and story of the original author. In my stage plays, I’m far more irreverent,” said Namm. “I take a lot of liberties to create stage magic, infusing the story with elements that aren’t found within the original tale, because I want the kids to be engaged on an interactive level.”

One example is “I Want My Wings,” an “Occupy Heaven” protest song performed by Burrus as he attempts to secure his angel wings from Head Angel, instead of completing his mission to convince a selfish and grumpy Mrs. Scrooge to like the spirit of gift giving.

Mrs. Scrooge, played by Kelly Derouin, does her best to rebuke the angel and the ghosts, but is eventually convinced to be charitable on Christmas.

“In my adaptations I like to pay homage to classics in all media,” said Namm. “In “Mrs. Scrooge,” there’s a tribute to “It’s A Wonderful Life” in the form of Teen Angel. When I adapted Beatrix Potter’s classic “Peter Rabbit,” calling it “Bunny Tales Episode IV: The Bunny Wars,” I was paying tribute to “Star Wars.”

Namm’s other stage adaptations are “Huck,” based on Mark Twain’s “Adventures of Huckleberry Finn” and “Red Chief” based on O.Henry’s short story “The Ransom of Red Chief.”

Namm has been writing screenplays since 1998 and stage plays since 2005. She also writes adaptations of classic novels for young readers for Sterling Books, a division of Barnes and Noble Booksellers.

The tale of “Mrs. Scrooge” whisks the audience through the peak events of “A Christmas Carol,” adds Teen Angel’s introduction in heaven, and follows Mrs. Scrooge’s Christmas shopping bonanza (she buys all the gifts for herself). The musical follows her back to her house where she fires her upbeat and gift-giving employee Miss Cratchit, played by the carefree Heather Cadarette.

Mr. Scrooge (D. Kevin Kelly) plays a perfectly slavish husband who follows Mrs. Scrooge’s every command without question, which adds to the comic relief of the musical.

Modern day adaptations of the three ghosts set to visit Mrs. Scrooge set the stage for some eerie rib-tickling delights.

The Ghost of Christmas Present adds more laughter and song and is played by bushy blonde-haired and fun loving Frank Weidner.

The Ghost of Christmas’ Future – that in this play speaks and interacts with the main characters – is only interested in character’s expiration dates and is played by the talented Jake Hamilton Lewis.

At the end of the play, audience members are given the chance to interact with cast members by tossing rubber snowballs at the goading Ghost of Christmas Future.

The music in “Mrs. Scrooge” is original. Composed and arranged by Robert Agis and Michael “Mac” Cooney with lyrics written by Diane Namm with Ed Cha; with two additional songs by Terence Davis.

“Mrs. Scrooge” is performing additional shows through Dec. 11 as a guest production at the Other Space, Santa Monica Playhouse on 1211 Fourth Street in Santa Monica and at the Highways Performance Space at 1651 18th Street from Dec. 16-18 and Dec. 22-24. Show times vary from afternoon performances at 3 p.m. to evening performances at 7:30 p.m.

For tickets and further information, visit http://www.westofbroadway.org or call 424.234.9962.