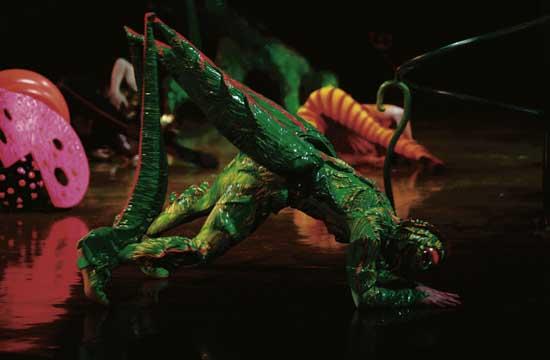 With the return of Cirque du Soleil to Santa Monica just over a month away, the costume designer of “OVO” made a special visit to the city this week to talk about her colorful, elaborate, and innovative costumes.

The trademark blue-and-yellow big-top tent will open performances to the public starting Jan. 20.

Costume designer Liz Vandal was one of the last collaborators brought onto the “OVO” production about a year before the touring show launched in April 2009.

When she started her contract, she said the story board for the show was already conceived by artistic director Deborah Colker – a colorful ecosystem teeming with life, where insects work, eat, crawl, flutter, play, fight, and look for love in a non-stop riot of energy and movement.

“The most important parameter after knowing they were insects and which kind of insects, we had to evocate insects, not imitate, that’s a very abstract thing to understand,” Vandal said. “You think of a spider and you want to draw a spider and you want to make a spider costume, which is sort of normal. But to go into the mindset of evocation was very abstract and difficult at first.”

When she started on the project, she said she had many drawings and prototypes that she created during the interview process.

She said she continued to develop these drawings and prototypes during the first few months of her contract.

“My way to show the concept is to make a costume,” she said. “It’s not about making so many drawings, but it’s really to see how the idea looks in space on the body.”

Her way of developing so many “works in progress” prototypes was not common to Cirque du Soleil’s founder Guy Laliberté who was keeping an eye on the production’s creation.

“He did not understand the way I was doing all these costumes that were temporary costumes, these prototypes just to show the whole space,” she said. “He was used to seeing a drawing and the finished product. Throughout the whole process he would say ‘Liz I don’t understand, it’s not so nice, it’s not finished.’ I said ‘Guy, it’s going to work, it’s going to work’ so he trusted me. When he saw the first general rehearsal with costumes, he said ‘Oh that was a big surprise.’ He was very happy.”

With a background in making dance costumes, Vandal knew the restrictions she faced when creating the 17 different insect costumes for “OVO.”

To allow for flexibility, she made the costumes from a mixture of fabrics to create both hard and soft flexible fabrics to give the look of a hard shell.

“It’s got to be stretched and they have to be able to do their extreme movement,” she said. “We have developed the specialist of the body movement, and no matter what they do they are not bothered in any way with what they are wearing. It becomes their second skin.”