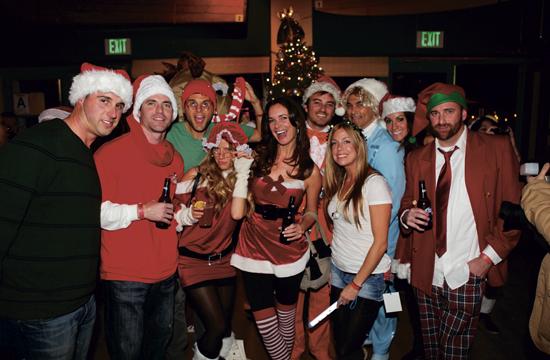 It is estimated that 4,500 people visited more than two dozen bars and restaurants in Santa Monica on Saturday, Dec. 17, as part of the 3rd Annual SANTA Monica Pub Crawl, which helped triple the number of donations from last year.

Organizer Kim Koury said the event raised about $17,500 for the Westside Food Bank that will be used to provide about 70,000 meals.

“Our goal was to bring the community together and support local business, while helping the less fortunate in the process,” Koury said.

She said the idea for the pub crawl developed after she had a conservation with a friend about the walkability of the city during a night out.

“At a time like the holidays, people are spending and consuming so much, it seemed there had to be a way to tie them together: to harness the spirit and cheer of Santa Monica with all of the dollars being spent to help the less fortunate,” she said. “ So I decided to throw a pub crawl for the whole city with the very idea of using one group’s consumption to provide for another’s need. The city has the perfect, fun name with the word SANTA in it, and I knew the Westside Food Bank was the ideal choice since they can turn $1 into enough for four meals.”

Koury said she had been overwhelmed this week with positive feedback following the event.

“Standing on the street the night of the event and seeing the streets full of happy people in holiday attire, all spreading good cheer, is also one of my favorite parts,” she said. “People are begging me to do it again in the summer.”

She said the event would continue to grow as long as people kept supporting the food bank and contributing to their local businesses.

“It is also extremely important that people continue to behave themselves, don’t get behind the wheel and help keep the streets clean,” she said. “If this continues to happen, we can expect to continue this tradition for years to come. Maybe one day, we’ll be allowed to close down streets.”

Since the start of the recession, Koury said the request for food at the Westside Food Bank had increased more than 100 percent.

“On behalf of the Westside Food Bank and myself, I want to sincerely thank all of the crawlers that came out on Saturday, and let them know that they helped contribute to feeding thousands of less fortunate individuals, including children, seniors, the mentally ill, homeless, veterans, the unemployed and women and children that have experienced domestic violence, for the holidays.”

For her efforts creating the pub crawl and helping feed thousands of people over the holidays, Koury has been nominated for an “America Inspired” award in the category of “passion” on Examiner.com.

The person/story with the highest amount of votes between Jan. 9 and Jan. 27 will receive $50,000 for their charity and in Koury’s case, Westside Food Bank will be the recipient.

To read the article and vote to help Koury become a finalist, visit